ALMOST 200 ETHNICITIES LIVE IN RUSSIA, AND THE NUMBER OF ETHNIC DISHES IS MANY TIMES GREATER. SOME ARE WELL-KNOWN, OTHERS MUCH LESS SO. TODAY WE WILL TELL YOU ABOUT SOME OF THESE AUTHENTIC ETHNIC DISHES AND WHERE YOU CAN TRY THEM.

The first recipes for okroshka are over a thousand years old. The main ingredient is kvass, which is mentioned in historical sources dating to 989. Originally, only onion and black radish were used to make okroshka. The sliced vegetables were doused in kvass and sour cream was added. Okroshka had a resurgence thanks to Volga barge haulers, who carried huge loaded barges. For their work, they were paid in kvass and vobla (fish jerky). The fish was dry and very salty, so the barge haulers began soaking it in kvass and adding vegetables to it.

The history of okroshka differs from location to location. The main ingredients are fish, meat, rutabaga, turnip, eggs and green vegetables. Sauerkraut or pickle brine, whey or kefir can all be used as broth. But most commonly the dish is doused in kvass, because of its refreshing and thirst-quenching qualities. The one essential ingredient is sour cream. 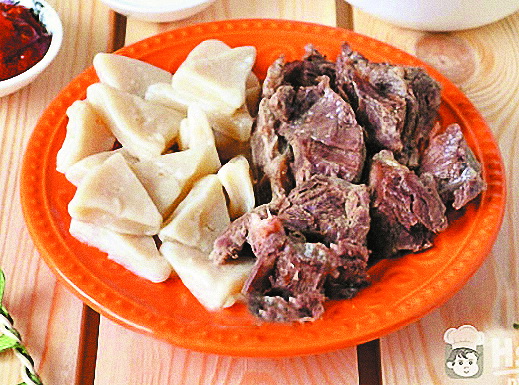 Khinkali is the calling card of Dagestani cuisine. It is not just one dish, but a whole collection of dishes. There are four important components in khinkali. The first one is boiled meat (mainly mutton, but beef, cured sausage or chicken may be used as well). The second component is a dough wrap of various shapes and sizes, as well as broth and sauce, always with garlic. People cook khinkali in all the regions of Dagestan, but there are some variations. For instance, khinkali are prepared by the Kumyk and Lak peoples using unfermented dough, while Avars use a dough made with sour milk. Khinkali look like wontons and may be served either separately or with mutton broth. 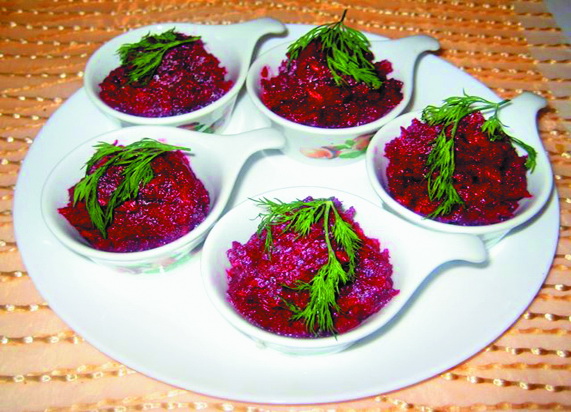 Mordovia’s traditional dishes are noted for their high nutritional value. That’s why they are not just tasty, but filling. A popular snack made with beets is called valdo yakstere viy: the name is translated as “scarlet power.” The recipe is simple. Boiled or fresh beets are cut into small pieces, mixed with traditional goat milk and sprinkled with vegetable oil. To these ingredients it is possible to add either sugar or salt. 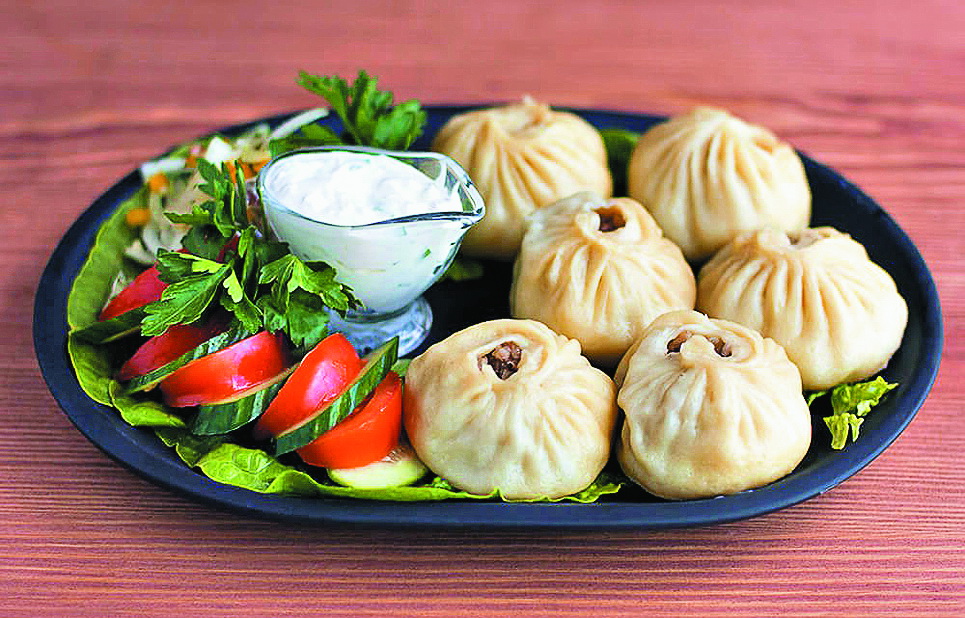 Buuz is a popular Buryat treat. They are sometimes confused with the more widespread manty dumplings. According to the Buryat recipe, trimmed mutton is minced in a wooden tub. Then the belly fat is finely chopped with onion and added to the ground meat. Salt, pepper, and a pressed clove of garlic are added to taste. To bind the juice from the mince, a tablespoon of sifted wheat flour is sprinkled over the mixture. The dough is made with eggs, rolled out thinly and cut into circles. A small piece of ground meat is placed in the center of the circle, and the edges are carefully folded, while rotating the buuz in the palm of the hand, leaving a small opening on top. The result should look like a beautiful meat “rose”. The buuz are steamed for half an hour, depending on their size and the thickness of the dough. 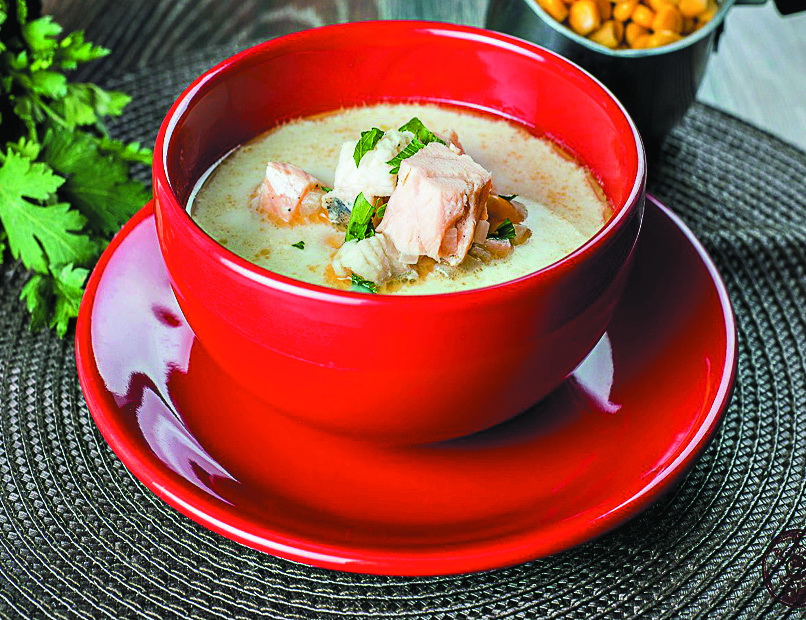 The most popular Karelian dish is the fish chowder called Kalaruokka. There are numerous versions of the recipe, but the most common one uses whitefish. In addition, locals sometimes make the soup with milk or with fermented fish. The secret of cooking Karelian fish chowder lies in the following: five minutes before readiness, the fish broth is poured through a thick layer of birch coals. Unlike the Russian equivalent (which is tastiest when it is most transparent), Kalaruokka is slightly murky. Not only eggs and fish are added, but also Iceland moss, rye flour, and birch buds.

Udmurtia is famous for its pelmeni (dumplings) and even the etymology of the word “pelmen” has Udmurt roots, according to one theory. But more popular among Udmurts themselves are perepechi: open-faced cheese pastries, prepared using unleavened dough with various fillings: cheese, mushrooms, cabbage or ham. They are cooked in traditional ovens, hence the name perepechi (from pech, meaning “oven”). In 2005, an event called “Perepechi vs. Pizza” took place in Izhevsk, but the dish gained wide popularity after the performance of the Buranov Babushkas band at the Eurovision Song Contest in 2012. The clip featuring an Udmurt oven had 13 million views on the Internet!

Dotur is soup made from mutton offal (liver, kidneys, tripe, intestines) with added belly fat, blood, milk and salt. The giblets are stewed separately, then doused with clear broth. This is a very thick, fatty soup, and it is served with sliced raw onion, sprinkled over dotur in the bowl. This dish has quite a particular taste, But it is probably the most authentic Kalmyk dish, and everyone who wants to understand Kalmyk cuisine has to try dotur.

Sakhalin cuisine is very unique. It combines elements of Russian, Korean, Japanese and Manchurian cuisine. The Sakhalin salad of burdock stalks is equally unusual. Green shoots of burdock are soaked in cold water overnight, then boiled for 20 minutes in salted water. The stalks are peeled, cut in small pieces and tossed into bubbling vegetable oil. Salt and pepper are added, along with soy sauce. The dish is sprinkled with sesame, sunflower or pumpkin seeds, and pressed garlic and onion are then added, after which the dish is stewed to readiness. Translated from the Tatar, besh means “five,” and barmak means “finger.” It is the dish of “five fingers” — to be eaten in your fingers, all five of them. This tradition originates from the times when Turkic nomads ate meat with their hands during meals. This is a hot dish of minced boiled meat (mutton or beef), with onions sliced in circles, and unleavened boiled dough in the form of noodles. All this is liberally peppered and served in a cauldron or cast-iron pot, from where you take as much as you want using your bare hands. Beshbarmak is usually accompanied with a hot, rich meat broth, slightly salted and peppered.

Bashkiriya is famous for its honey, which is why Bashkir ethnic dishes are not just about meat. The most popular desert of the Bashkir people is chak-chak. To make it, you need eggs, flour, sugar, honey, and melted butter, as well as water and salt. Whipped eggs, flour and salt are mixed into a dough, which must then be rolled out into a layer five millimeters thick. The sheet of dough is then sliced into strips no more than a centimeter wide and cut across into small pieces. These strips are then fried in melted butter. A syrup is made out of water, sugar and honey, which is then combined with the fried pieces of dough. The finished dish is usually piled up on a plate in a heap and served with tea after the dessert sets.