IN THE BLUE LIGHT OF THE STARS, THE IDOLS EMERGE FROM THE DARKNESS – THE PAGAN DEITIES OF THE ANCIENT SLAVS. THEY MOVE SLOWLY IN SOME MYSTICAL RITE…

The “Golden Ring” National Theatre of Folk Music and Song presents its unique show, titled just that – “Golden Ring”. On its stage, without leaving Moscow, the audience can see the diversity of Russian traditions and cultures from the ancient pagan times onwards. It’s not just a performance, it’s an exciting, fantastical journey through time and space, exploring the vast reaches of an immense country and its history. 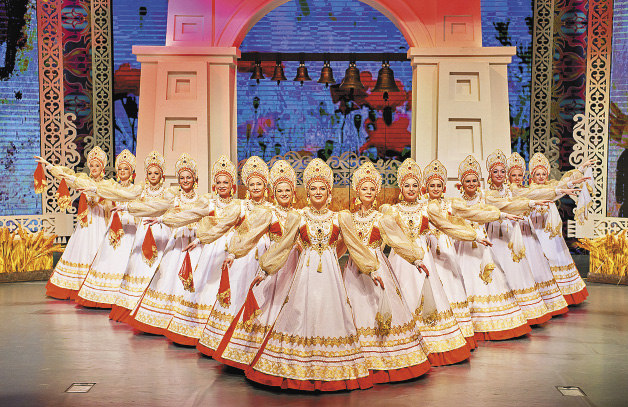 “We have been preparing this show for 35 years,” says Alexander Kostyuk. “Ever since we were students, we have been going on expeditions to the most remote villages and settlements; we have been looking for old musical instruments, for rituals, traditions, costumes, local folklore.” 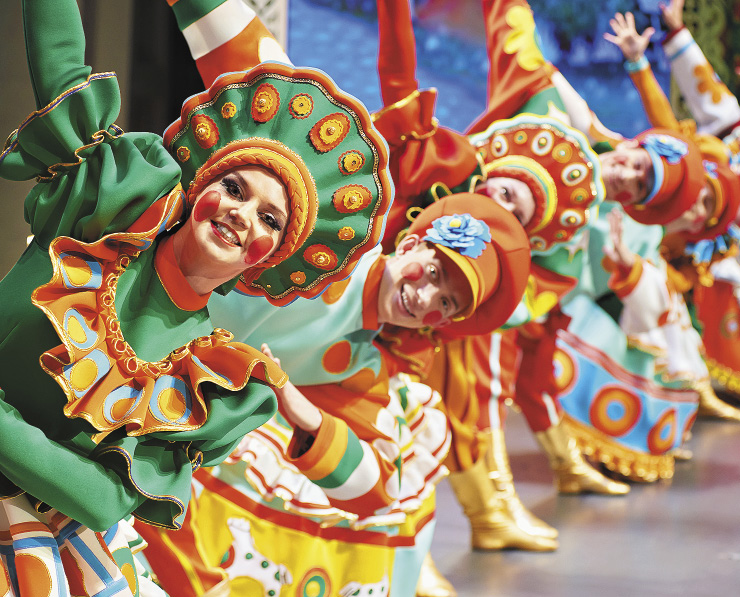 The powerful, sad sound of a hurdy-gurdy, that magnificent, ancient and absolutely cosmic musical instrument, as if it is spinning the wheel of history takes us to the heart of Orthodox Russia. The wistful ring of a bell goes deep into the soul, the rhythmic thud of the shepherd’s drum grips our heart. Saratov accordions with bells, flutes, ocarinas, gusli, ratchets, tambourines, chopping and washing boards, scythes and other ancient folk musical instruments have been made specially for this show by master craftsmen. All these instruments, like precious pearls strung on the thread of the life of a great country, immerse the viewer in a special and unique world that evokes bright and diverse feelings and emotions. 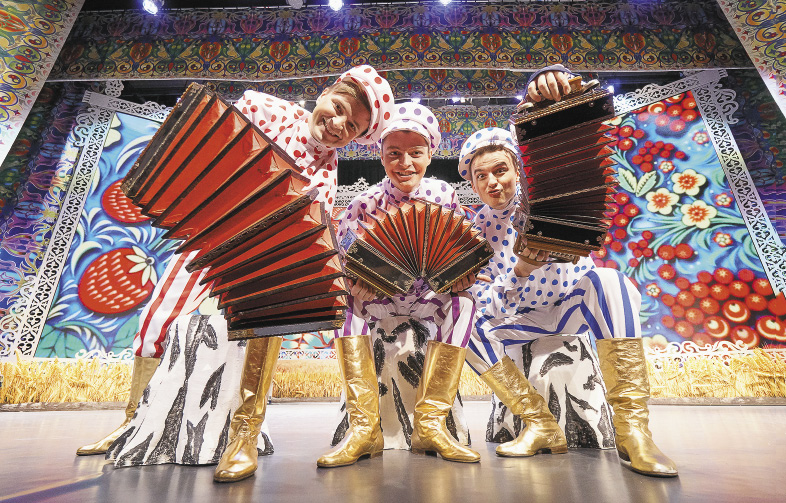 “Kalinka-Malinka” and “Podmoskovnye Vechera” have long become images of Russia, an embodiment of the unique spirit of its people.

Paganini played on the balalaika always brings a burst of applause and enthusiastic cries of “Bravo!” 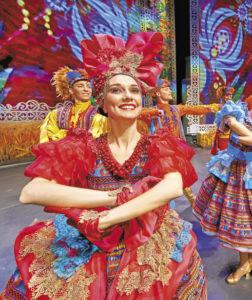 The Russian “round dance” is like life itself, a symbol of beauty and universal harmony, as girls, dressed in white and gold sarafans and kokoshnik headdresses, gracefully float across the stage.

The amazing, bright and colourful costumes created with the help of Nadezhda Kadysheva are sure to impress, with some 350 made especially for the show, each one a real work of art. Along with the magnificent decorations and live musical score, the bright video on huge screens and immersive 3D light effects make the show unique and unforgettable.

Against the background of restrained Northern costumes, the Pavlov-Posad shawls “burn bright”. As if by magic one flashes after another, in a whirl of red, yellow, blue and green. There are Dymkovo toys and gzhel, some of the most famous Russian crafts, and you will see that famous ornamental teapot and its decorated cups start a fiery dance. The Kuban Cossacks and folklore are inseparable, their sword dance one the most complex and dangerous performances possible with weapons. Shashka sabres cut through the air, crossing and clanging, as the young dancers’ boldness spreads to the audience and captivates it.

THE AMAZING, BRIGHT AND COLOURFUL COSTUMES CREATED WITH THE HELP OF NADEZHDA KADYSHEVA ARE SURE TO IMPRESS, WITH SOME 350 MADE ESPECIALLY FOR THE SHOW, EACH ONE A REAL WORK OF ART. 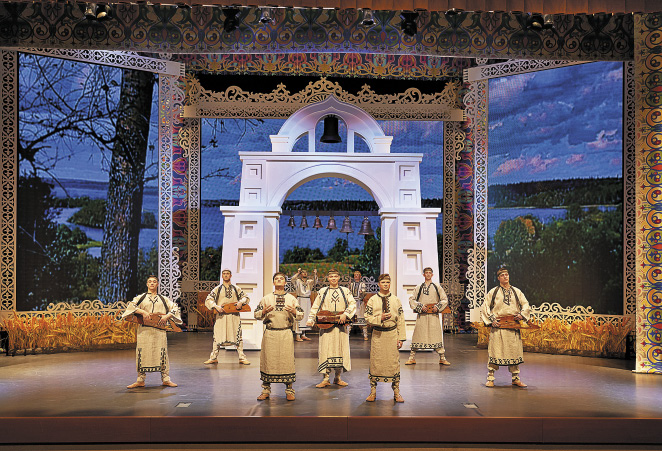 As a hurdy-gurdy plays, the wheel of history spins. Bridges between long-forgotten eras and our own time appear one after another, connecting the amusement chamber of Ivan the Terrible with a boisterous fair with lively quadrilles, life-size puppets, skomorokh harleqins, bears and trampoline artists. Transfixed, the audience catches its breath, awed by the courage of the artists and their remarkable skill. An incredible energy fills the air, making hearts beat faster. Now the festive “round dance” starts! Dancers move between the rows, drawing in the audience, streaming back towards the stage…

“Golden Ring” is a synthesis of folklore, vocals, dance, instrumental music, circus and high art. It is unique for the fact that artists from dance and music schools from all over the country have come together. In every sense, it is a calling-card for Russia herself.

Booking and purchase of tickets on the theatre’s website: www.goldenringshow.ru