A decorative box with list of artists of the Lukutin factory “The Flying Three”. Fedoskino. Mid-19th century.

TOURISTS OFTEN WONDER ABOUT THE BEST PRESENTS TO TAKE HOME FROM RUSSIA FOR FRIENDS AND FAMILY. HERE IS OUR “TOP 10” LIST OF MOST POPULAR HANDICRAFT ITEMS, SOME OF WHICH HAVE TRADITIONS THAT DATE BACK CENTURIES.

Traditional handicrafts date back centuries, to the days when craftsmen created a range of items for daily use. Today, the handicraft industry produces high-quality goods that also often have an artistic value – offering aesthetic quality as well as practical use. 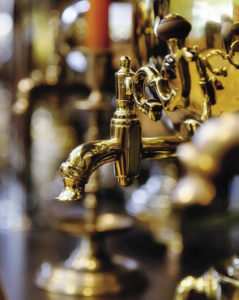 The Russian word “samovar” has entered almost all languages. The first samovar – or “a water-heating vessel with a pipe and inside oven”, as it was described in the old days – was made in Tula in 1778. With high popular demand for samovars, rich metal deposits, and highly qualified craftsmen in the region, Tula, the city of gunsmiths, immediately became world-famous as the samovar centre of Russia. The Tula Samovar museum opened in 1990, and is now a popular landmark in the city.

The Russian word samovar has entered almost all languages. The first samovar – or “a water-heating vessel with a pipe and inside oven”, as it was described in the old days – was made in Tula. 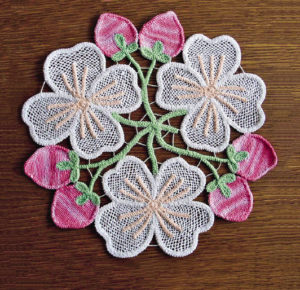 Vologda lace is made of thick, seamless, even linen threads, the smooth twists of which form a distinct pattern. The visual effect of Vologda lace is often compared to window frost and snowflakes, and this Russian craft has become a true art form. Lace is used to make adornments, tablecloths, napkins, panels, clothing, and even footwear. Today, Vologda lace is made by Snezhinka, a firm which employs craft artists using traditional bobbins to produce hand-made lace. In 2010, Vologda opened Russia’s first and only Lace Museum, which displays a range of amazing exhibits.

Vologda lace is hand-woven on bobbins, and used to decorate clothes and shoes.

The potters of Gzhel have been making ceramic ware since the seventh century. The region includes about 30 villages near Moscow that are known as the “Gzhel cluster”, and is Russia’s key pottery producer today. The renowned blue-and-white ceramic items are made with amazing artistry and creative design. But beware of counterfeits! Many fake Gzhel-like items find their way into the market. Before you buy, check the quality, design and material. The authentic article is extra-thin and shiny – porcelain cannot be heavy, and items that are heavy are earthenware, not porcelain. 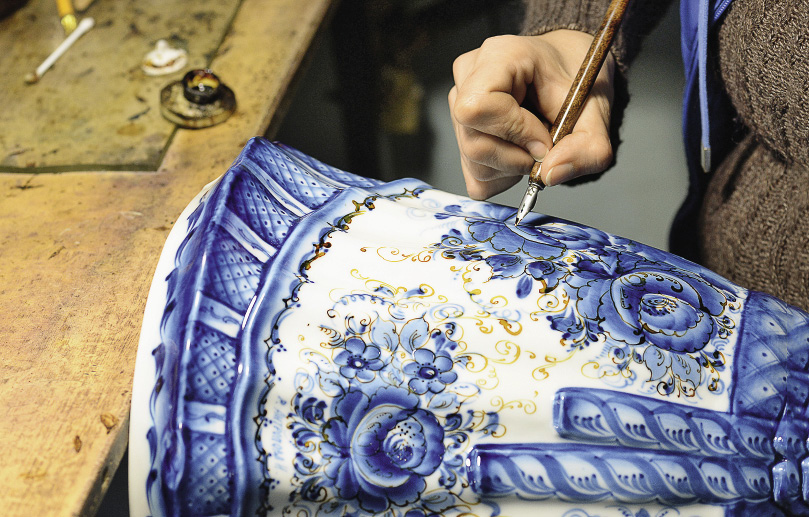 Orenburg Shawls are a symbol of Russian comfort. They feel warm and thick but are light and delicate like a spider web. They are made of handspun goat fibre, the world’s finest, which makes the shawls exceptionally tender and soft. A high-quality shawl can be pulled through a wedding ring. These shawls were first shown internationally at the 1857 Paris World Fair, which was just the beginning of their global fame. They became so popular that a British company even produced its own fibre shawls and called them “Orenburg shawl imitation”. Today, some of the world’s most elegant women, such as Montserrat Caballé and Catherine Deneuve, have Orenburg shawls in their wardrobes.

Khokhloma is a decorative wood-painting style in black and red on a golden background. The technology, colour and pattern developed in the north of the Nizhny Novgorod region at the turn of the 17th and 18th century. The name originates from the merchant village of Khokhloma, where craftsmen would bring their handmade wooden spoons for sale. Such items are traditionally some of the best souvenirs to take home from Russia – they tell a unique story of Russian craftsmen who still keep the secrets of Old Russia. 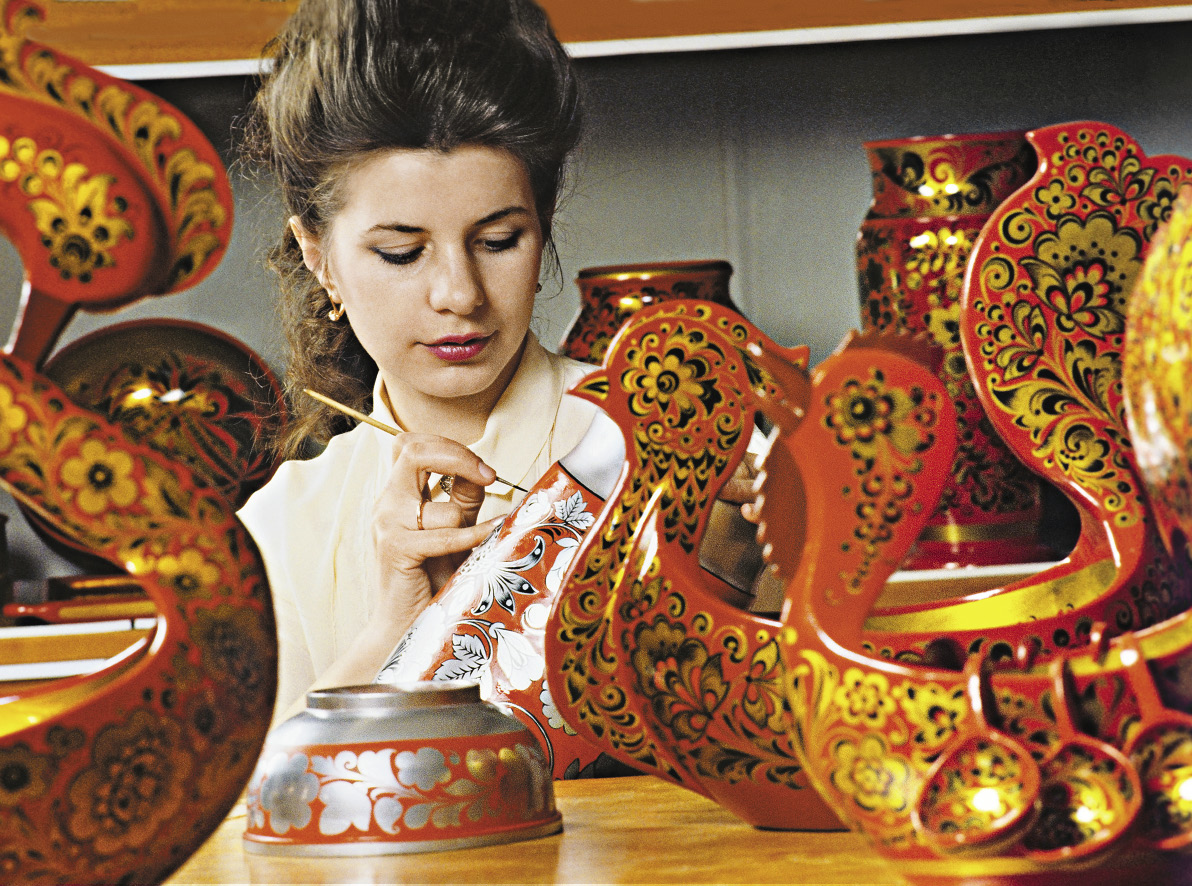 Bogorodskaya wooden toys appeared some 350 years ago, influenced by craftsmen from the Trinity Lavra of St. Sergius, a handicraft centre of Muscovy Russia. They are unpainted figures of people, animals, and birds carved from linden wood, with some featuring scenes of everyday peasant life. The toys can move – the best-known composition is “Blacksmiths”, which features a peasant and a bear taking turns to hit an anvil. That toy became a symbol of the craft and appears in the emblem of the Bogorodskoye settlement outside Moscow. 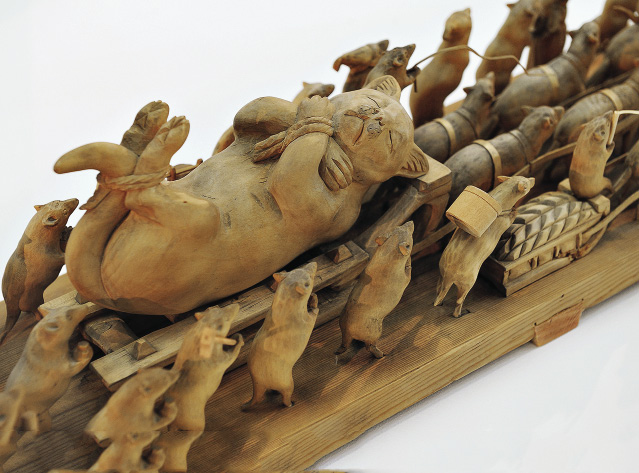 A Bogorodskaya toy: “How the mice buried the cat.” 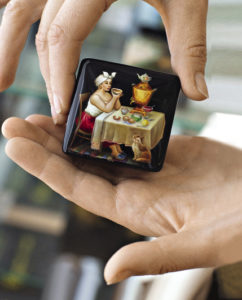 This type of handicraft first appeared in Fedoskino, a village near Moscow, in 1795. Craftsmen follow traditional techniques of making lacquer boxes of papier-mâché, together with the classic technique of multi-layer oil painting as used by artists as varied as Leonardo da Vinci, Karl Brullov and Rubens. The brilliant use of transparent paints, which look brighter by contrast against a black lacquer background, have made the craftsmen of Fedoskino famous both in Russia and around Europe. The Fedoskino factory manufactures boxes, cases, powder and needle boxes, tea cases, brooches and pendants in papier-mâché. Such miniatures can be found in private and public collections worldwide. 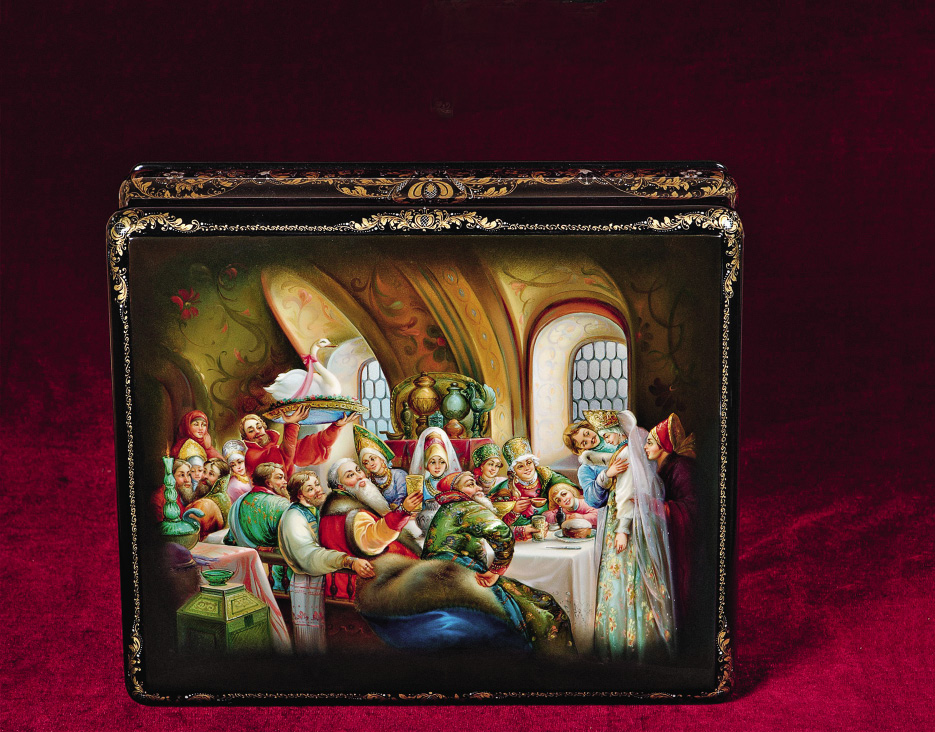 The Fedoskino factory manufactures boxes, cases, powder and needle boxes, tea cases, brooches and pendants in papier mache. Such miniatures can be found in private and public collections worldwide. 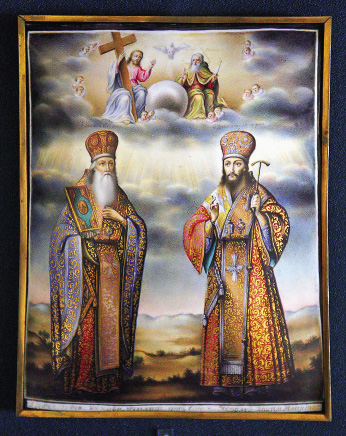 Rostov the Great (Rostov Veliky) boasts three “wonders” that are widely known both in Russia and abroad – the Rostov Kremlin, Rostov bells, and Rostov enamels. Enamels are the town’s traditional handicraft, one which originated as icon-painting in the second half of the 18th century. The French jeweller Jean Toutain invented special paints in 1632, with glass as their main element and added metal oxide: they are placed on a metal base (steel, copper, silver, or golden plate) and burned in a furnace. The “Rostov Enamel” factory manufactures jewellery, tableware, souvenirs, icons and other items, and has a museum where artists and jewellers demonstrate how they create their works.

In the Museum of Enamel at the Rostov Kremlin. 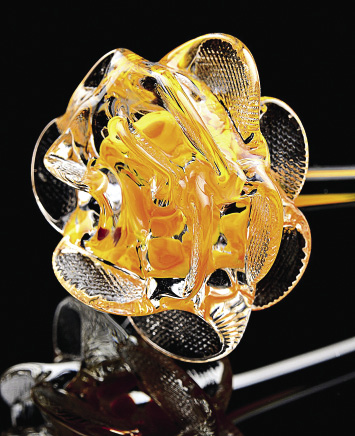 Dyatkovo crystal has a history of 200 years behind it, with the factory founded in 1790 by the Maltsov merchant family in the village of Dyatkovo, now a town in the Bryansk Region. In the 19th century, Dyatkovo craftsmen made 200-piece dinner sets for the Tsar’s residences, including the Winter Palace in St. Petersburg and the summer palaces in Tsarskoye Selo and Gatchina. Dyatkovo crystal tableware is used in the Kremlin for important occasions, and it can be found in many prestigious private and public collections.

Dyatkovo crystal is famous all over the world.

Skopin is the name of a town in the Ryazan region as well as its famous handicraft, and it derives from the fantastic ancient “fishing bird”, the skop. The craft originated in 1640 and Skopin craftsmen still make tableware with distinct imagery. In the 19th century, Skopin started to mass produce glazed figured vessels and candlesticks shaped like birds and fish, decorated with rich patterns. Such fanciful figures were sold in marketplaces in Moscow, Ryazan, Lipetsk, Southern Russia and Ukraine, and they have also reached museum collectioms in Montreal, Paris and Berlin. 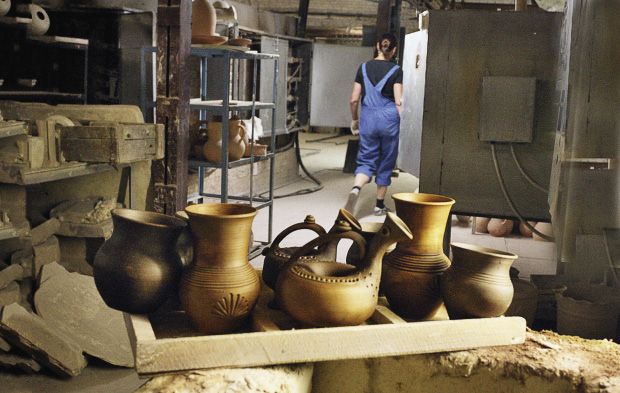 At the Skopinsky art pottery factory.