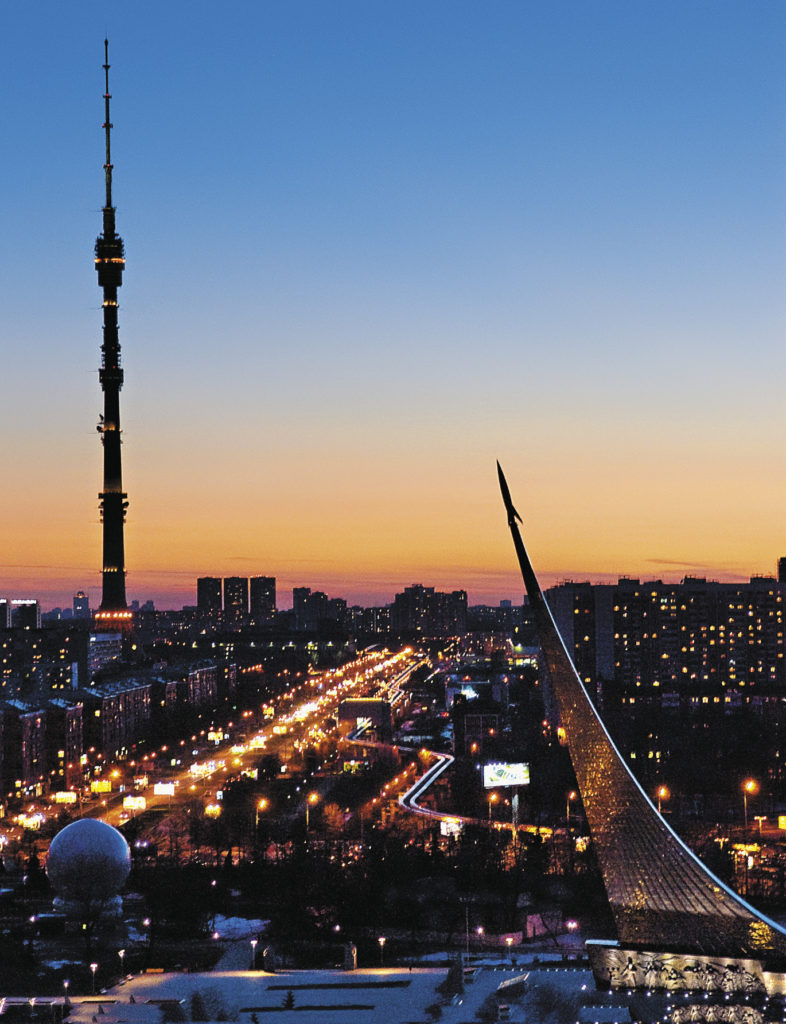 The capital of the Russian Federation and the largest metropolis in the country, Moscow marks the 870th anniversary of its foundation in 2017. According to official data, about 12.4 million people live in Moscow, making the city among the top 10 in the world in terms of population. It is the most important transport hub of Russia, served by five airports, nine railway stations, three river ports, 13 metro lines, and the Moscow Central Circle (MCC), an additional rail network that opened in autumn 2016. You can reach Moscow by air, land and water from almost all countries in the world.

Moscow will host 12 world championship matches, including the opening ceremony of the tournament and the final. Group games will be held at two stadiums in Moscow on 14, 16, 17, 19, 20, 23, 26 and 27 June. 1/8 play-off matches will be held on July 1 and 3. The semi-final is on July 11 at the “Luzhniki” stadium, and the final game and the closing ceremony of the World Cup is on July 15 at the “Luzhniki” Olympic stadium.

“Arena Luzhniki”. This sports complex was commissioned in 1956 for the first Spartakiad of the peoples of the USSR (a kind of Soviet Olympics). Over the years, the main stadium of Russia has hosted many competitions, including the 1980 Summer Olympics. In 2013, a large-scale reconstruction began, as a result of which this grand sports arena became a dedicated football stadium with the capacity to seat 81,000 people. Address: Luzhniki Street, 24.

“Arena Spartak”. This is the second Moscow stadium, which was built in 2014 for the football club “Spartak” on the Tushino airfield in Moscow. It has a capacity of 45,000 people (the average attendance of FC “Spartak” is 30,000 people). In the summer of 2017, the stadium hosted four matches in the FIFA Confederations Cup, and cultural events are also held there. Address: Volokolamsk Highway, site 67.

How to get to the stadiums

“Arena Luzhniki”. There are several large car parks at the sports complex, but it has not yet been announced whether it will be possible to enter them with match tickets for free, or for a fee. However, thanks to the Moscow public transport network it is easy to reach Luzhniki from anywhere in Moscow or the Moscow Region. Near the stadium are the metro stations “Sportivnaya” and “Vorobyovy Gory”, the MCC station “Luzhniki”, and trolleybus and bus stops. Before the start of the World Cup a cable car from the opposite bank of the Moscow river will open.

“Arena Spartak”. You can come by car from the centre of Moscow, but a pass is required for the car park, which means it is more convenient to reach the arena by metro. Next to the stadium are the metro stations “Spartak” and “Tushinskaya”, which are on the “purple” line of the Moscow metro. A suburban train and other public transport routes run nearby. For match ticket holders, travel is free. 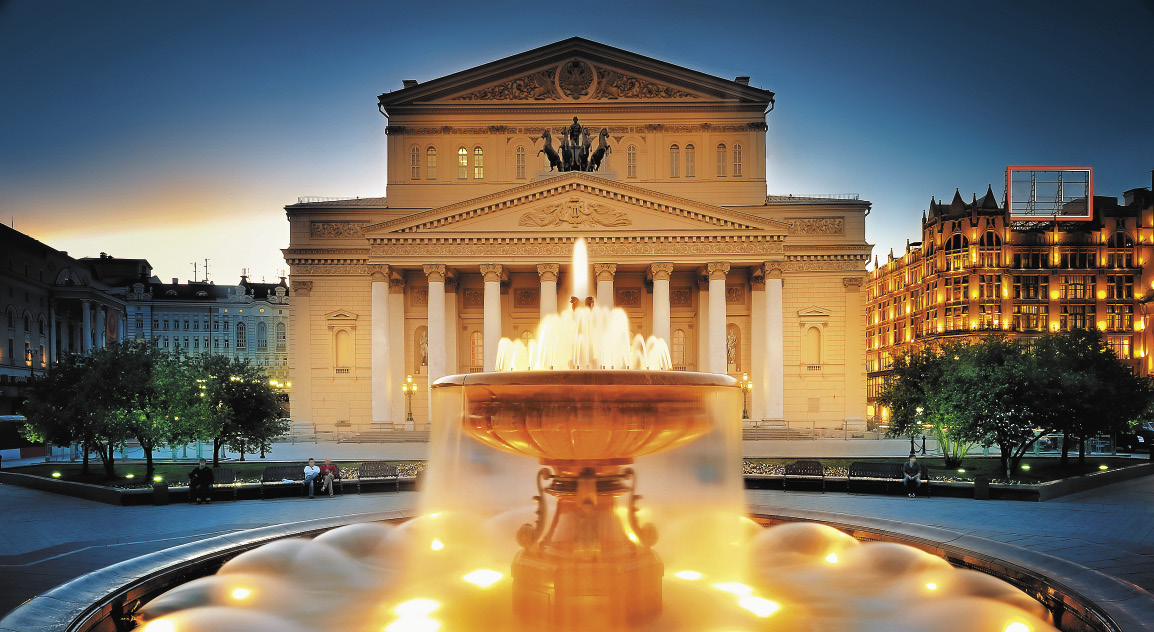 The Bolshoi Theatre is a must for all fans of opera and ballet who visit Moscow. 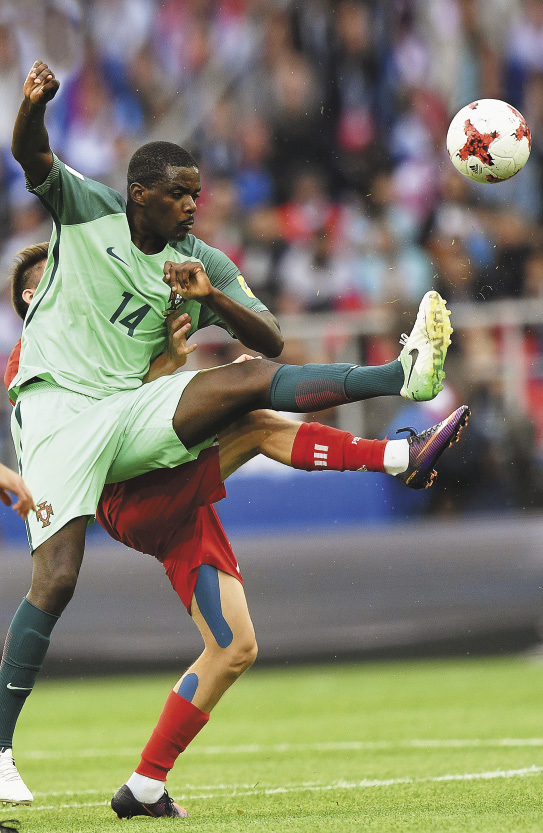 Matches of the Confederations Cup were held this year. 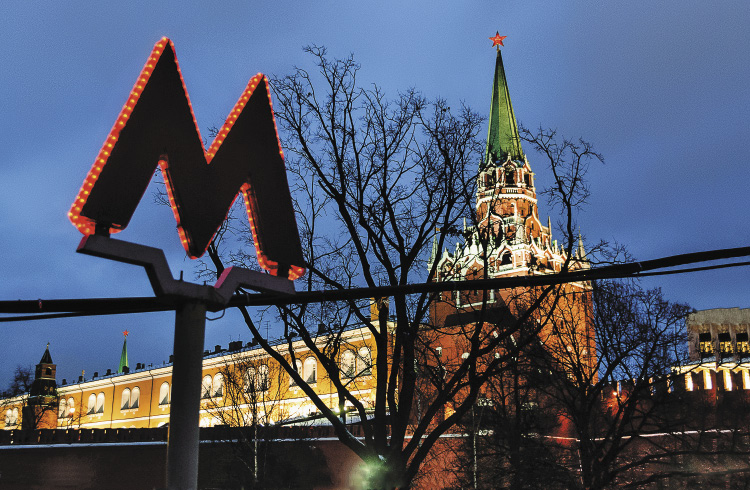 The Metro and Red Square are two sites that no visitor should miss.

EVENTS World Cup
ALMOST ALL THOSE WHO VISIT MOSCOW GO TO RED SQUARE, THE HISTORICAL MUSEUM AND THE ALEXANDER GARDEN. IN MOSCOW AND THE MOSCOW REGION, THERE ARE HUNDREDS OF THEATRES, MUSEUMS, PARKS AND ARISTOCRATIC ESTATES TO SUIT EVERY TASTE. IF YOU PREFER UNHURRIED CONTEMPLATION, TAKE A BOAT TRIP ALONG THE MOSCOW RIVER.

The main fan zones will be located in Moscow at VDNKh and Vorobyovy Gory. The square in front of Moscow State University at Vorobyovy Gory will accommodate 45-50,000 fans, and the VDNKh zone up to one million people. FIFA souvenirs will also be on sale at the Vasilievsky Slope near the Kremlin walls. However, Red Square will not be equipped with screens for viewing matches.

Moscow has a huge range of hotels with different levels of service, and more than 100,000 rooms in total. Prices in international chain hotels and mini-hotels range from $60 for a standard room to $8,000-10,000 for elite apartments. Fans can rent an apartment or room with Muscovites, with many such offers on the Internet.

Budget tourists can try “Canteen №57” in GUM, the Russian cafe “Brusnik” in Kitai Gorod, the network of Georgian eateries
“VeiMe”, or the famous “Cheburechnaya” in the VDNKh area, where the average bill is around $5-7 per person. Foreign guests might prefer familiar brands like “McDonalds”, “Starbucks” or “Pizza Express”. For more extravagant visitors there is a wide selection of restaurants and cafes, both in the centre of Moscow and in the stadiums, which have large restaurant areas.

Almost all those who visit Moscow go to Red Square, the Historical Museum and the Alexander Garden. In Moscow and the Moscow region, there are hundreds of theatres, museums, parks and aristocratic estates to suit every taste. There is an extensive network of bike rentals around the city. For excitement try a choice of quests that will take you to abandoned metro stations and other iconic structures. If you prefer unhurried contemplation, take a boat trip along the Moscow River: tickets for 2017 were $7. A dinner trip on a comfortable boat costs about $50. 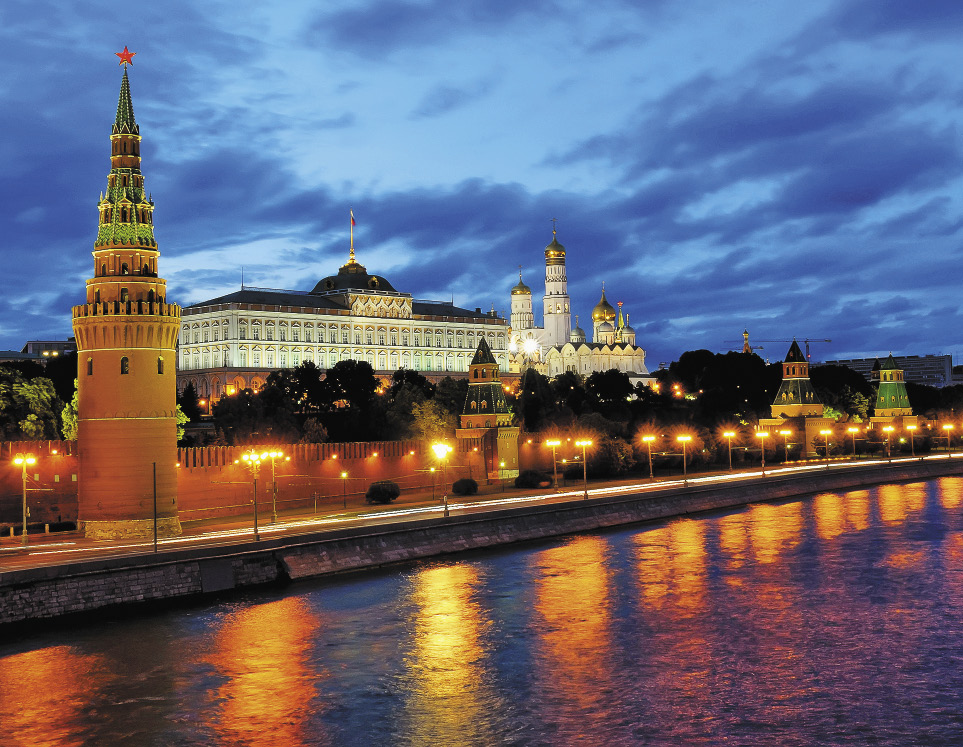 The Moscow Kremlin includes the official residence of the President of Russia. 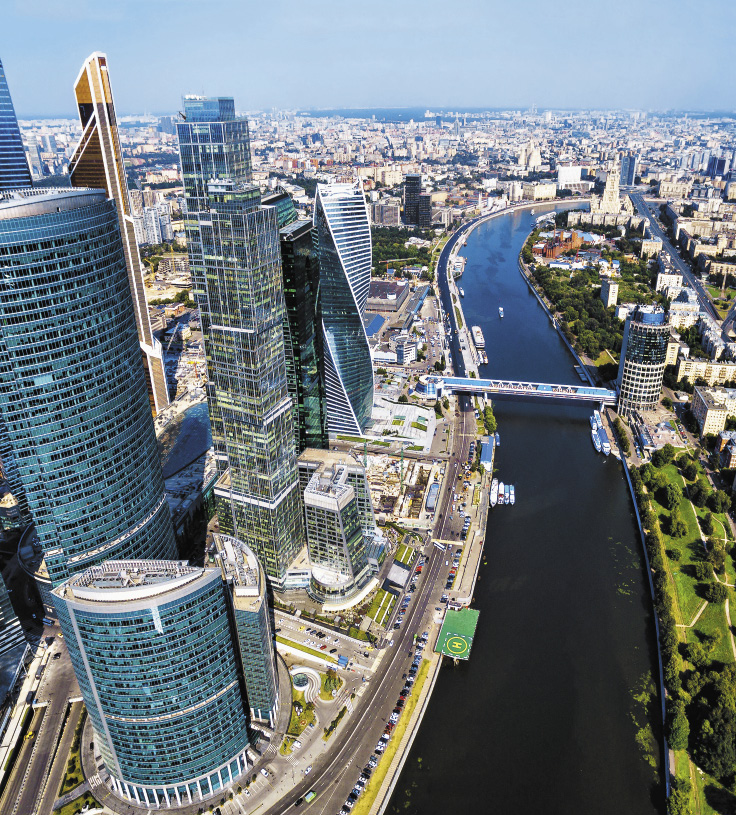 The towers of the “Moscow-City” business centre make a striking skyline. 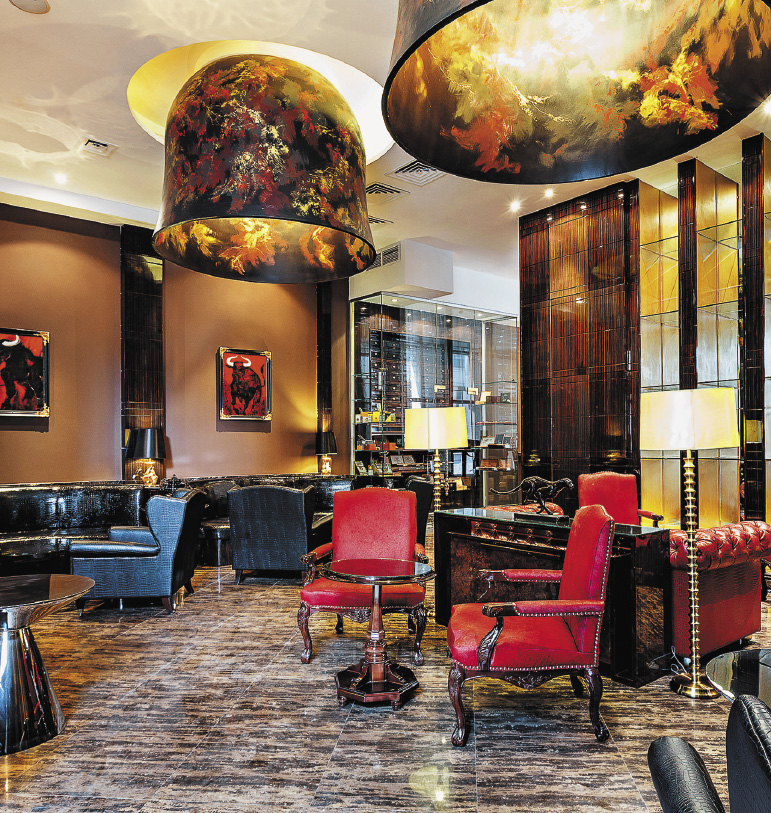 The Robusto Cigar club in the The St. Regis Moscow Nikolskaya hotel. 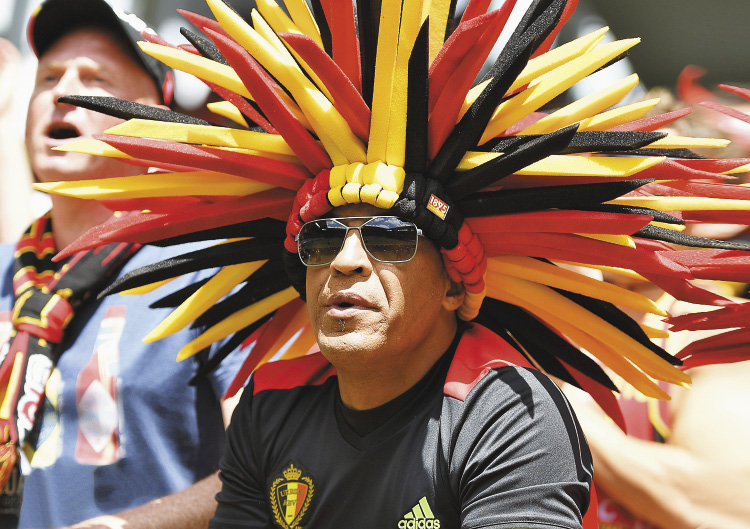 A Belgian fan at the Confederations Cup-2017. 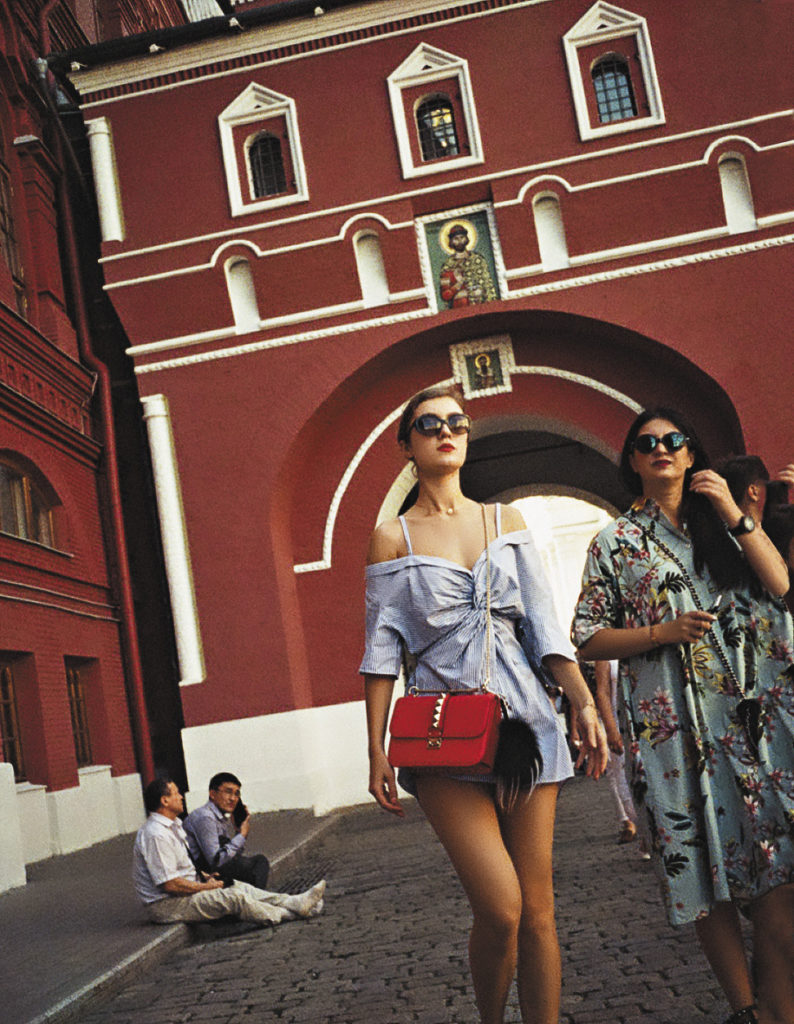