IF IT’S YOUR FIRST TIME IN ROSTOV-ON-DON, ALSO KNOWN AS “THE SOUTHERN CAPITAL OF RUSSIA”, MAKE SURE YOU’RE EQUIPPED WITH A CAMERA AND A GOOD MOOD, AND HEAD OUT FOR A WALK.

The main avenue of the city, Bolshaya Sadovaya Ulitsa (“Great Garden Street”) got its name back in the 19th century when it was surrounded by the tender pale pink of apple and cherry orchards, in place of the large stone buildings that now line the street. Looking now at this city of over a million inhabitants, it’s hard to believe that until the middle of the 19th century there were only 14 streets in Rostov-on-Don. The main buildings on Bolshaya Sadovaya date back to the construction boom that came to the city with the development of the port and the introduction of the railroad. At the turn of the 20th century, rich men from all over the south – bankers, grain merchants, and even artists – built themselves mansions along the street. In the “Russian Chicago”, as it was jokingly known at the time, the finest architects of the era let their fantasies roam free.

The first photo that every tourist takes in Rostov-on-Don is a selfie in front of the monument to St. Dmitry on the square in front of the Cathedral of the Nativity of the Blessed Virgin. The cathedral was built in the Russo-Byzantine style by Konstantin Ton, architect of the Kremlin Armory and Cathedral of Christ the Savior in Moscow, and is an exact copy of his Presentation Cathedral in St.Petersburg (destroyed in 1933).

Running from Bolshaya Sadovaya Ulitsa to the cathedral is the pedestrian Soborny district that is the Rostov equivalent of Moscow’s Arbat, with numerous cafés and souvenir stores. Beneath the cathedral walls lies one of the most vibrant city sites – the Central Market.

On the other side of Bolshaya Sadovaya can be found Rostov’s historic central park, now bearing the name of the writer Maxim Gorky. Right behind the park stands another fi ne building – Rostov’s City Hall and Parliament, the facade of which boasts more than 250 sculptures and artistic decorations. In the evenings, carefully designed lighting adds to the town hall’s fairy-tale atmosphere. The building is an exquisite example of fi n de siècle architecture. For many years it was painted white, and the locals fondly compared it to a sponge cake with whipped cream. Then, a couple of years ago, its original color scheme was restored, so now they joke that it’s more like a crème brulée.

Rostov’s modern inhabitants are also keen on creative experiments. Head to the next major intersection, and you’ll find a hotel in the shape of a milk bottle. From the restaurant on the top fl oor, you get a fantastic panoramic view of the city center, while down below there’s a karaoke club with its own music studio.

Rostov’s theaters are also highly unusual. Th e Rostov State Musical Th eater was built in the form of a white grand piano with the lid open, while the Maxim Gorky Rostov Academic Drama Theatre was supposedly inspired by the Soviet Union’s fi rst tractor. The Gorky Th eater merits a mention in numerous books on Soviet architecture, as well as museum exhibitions, as one of the fi nest extant examples of constructivism in Russia. For example, in the London Museum of Architecture there are only two exhibits representing Russia – including models of Moscow’s St. Basil’s Cathedral and the Gorky Th eater in Rostov. Even so, few know that the high reliefs that decorate the theater
are the work of the well-known sculptor Sergey Korolkov, a Don cossack from the village of Konstantinovsky. Internationally renowned as an artist and designer, his works illustrated the fi rst edition of Mikhail Sholokhov’s Quiet Flows the Don.

Come to this Don capital, take a walk round town, breathe in the warm southern air, and you’ll never want to leave! 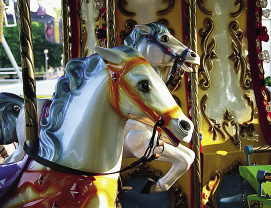 Population: 1,125,300.
Ethnic Groups: More than 150.
Houses of Worship: About 40 Russian Orthodox churches – including churches of the Old Believers. Churches of the Armenian Apostolic, Roman Catholic and Greek Orthodox faiths can also be found, in addition to a mosque, Buddhist centers, and Jewish synagogues.
Bridges: The city has 7 bridges, and the embankments stretch for more than 2km along the river.
Attraction: Rostov boasts one of Europe’s largest zoos.
Sport: Rostov Arena hosted matches of the FIFA World Cup in the summer of 2018.