IN THE FOOTHILLS OF ALTAI there is a lake that never !eezes over even in the most savage cold. There, each winter a miracle happens. On the open waters of the lake, shrouded in thick fog, dozens of swans flock together. This lake is held in reverence above all others by one of the local indigenous peoples–the Kumandins. 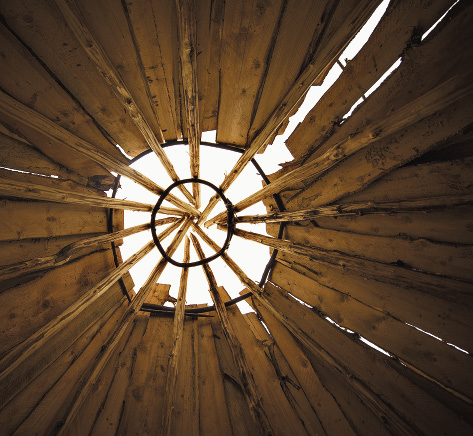 It is said that once upon a time, among the ordinary birds, the spirits of nature flew here in the form of swans. Once here, they removed their wings and turned into beautiful maidens. At the time, the people knew nothing of the lake, or of the swans. Then one day a hunter came to the lake and by chance saw the spirits in human form. When he saw them, he fell in love. Then, to keep the beautiful spirit with him, the hunter stole and hid the maiden’s wings. Everything went according to plan—despairing of finding her wings and returning to bird form, the maiden stayed with the hunter. And that was how the Kumandin race—the swan people—were born.

Censuses in the Soviet era varied between classifying the Kumandins as a separate ethnic group or combining them with the Altai people. Linguists were also at odds as to whether the Kumandin language could be classified as a separate tongue. There were also those who thought the Kumandins were simply a group of Altaians who claimed unique ethnic status just to gain privileges of some sort. The Kumandins themselves, however, always considered their people to be separate. Once there were many more of them, with their own rituals, customs, and traditions. Guests were greeted with a pipe-smoking ceremony, while they bid farewell to the dead by carrying the coffin three times around the home and smoking dry juniper in order to close the gates to the underworld behind the departed. They had their own religion and their own shamanic healers, called kamy, who traveled in the underworld and the higher realm to talk with the spirits. Even in the Soviet era, when Party officials and collective farm managers were fatally sick, they called not only for doctors, but also for one of the kamy. And it some cases, it even helped.

Today, the Kumandin number just over 3 000. Once nomads, hunters, and fishermen, at the beginning of the 21st century the Kumandins swapped hunting for homesteading, and their fishing opportunities are now restricted by quotas. If you ask them where to go to see Kumandin culture in all its glory, the swan-people will tell you: “Go back in time 70 years.”

THE KUMANDIN ALWAYS CONSIDERED themselves a separate people. Once there were many more of them, with their own rit!als, customs, and traditions. Guests were g”eeted with a pipesmoking ceremony. They had their own religion and their own shamans– kamy, who travelled to the underworld and the higher realm.

It is difficult to say why this group was unable to maintain its ethnic identity. On the one hand, the Soviet system fought against their beliefs, as it did against any religion. And, while no one was forbidden from speaking their native language, young Kumandins nevertheless preferred Russian. Further damage was done by ethnographic expeditions, which pillaged from Kumandian villages- costumes, shamanic ritual relics, and traditional household artifacts. Now, in order to see their own traditional costumes, Kumandins have, with great difficulty, to get into the archives of
the State Hermitage Museum.

Historians will dig deeper still. The Kumandins were never an aggressive people. When Russian settlers came to the foothills of Altai, the locals met them as friends, teaching them how to survive in the taiga and how to get through the harsh winters. In return, they were dispossessed and slaughtered. Rather than answering violence with violence, the swan people just retreated further into the forest.

However, deprived of almost everything and pushed back to the very brink—the point of no return—the Kumandins desperately cling on to their way of life and their future. They have begun to revive their native language. Activists from ethnic societies make expeditions deep into the countryside to find older generations and record their words and legends. Then, at Sunday schools, they teach their children the Kumandin language. The children are happy to attend the lessons, and show off to their peers that they belong to the ancient people of Altai. After all, these days it is fashionable to have a unique identity. In the evenings, in small village houses, it is increasingly common to find gatherings of dignified old ladies who make special Kumandin dumplings with minced potato, drink tea with tolkan (roasted wheat ground between stones), talk about life, and burst into song. What they sing is always heartfelt, and always in the Kumandin language.