PYOTR NIKITIN IS A PROFESSIONAL VOLUNTEER WHO HAS WORKED IN VARIOUS NATURE RESERVES. FOR HIS ENTIRE LIFE, HE HAS BEEN TRAVELLING THROUGH THE MOST INTERESTING CORNERS OF THE PLANET. PYOTR RECENTLY WENT TO THE KRONOTSKY RESERVE AS A VOLUNTEER AND IS NOW TAKING PHOTOGRAPHS OF THE VOLCANOES OF KAMCHATKA, THE KURILE LAKE, GEYSERS AND BROWN BEARS, AND THE FOXES THAT COME RIGHT UP TO HIS HOUSE. 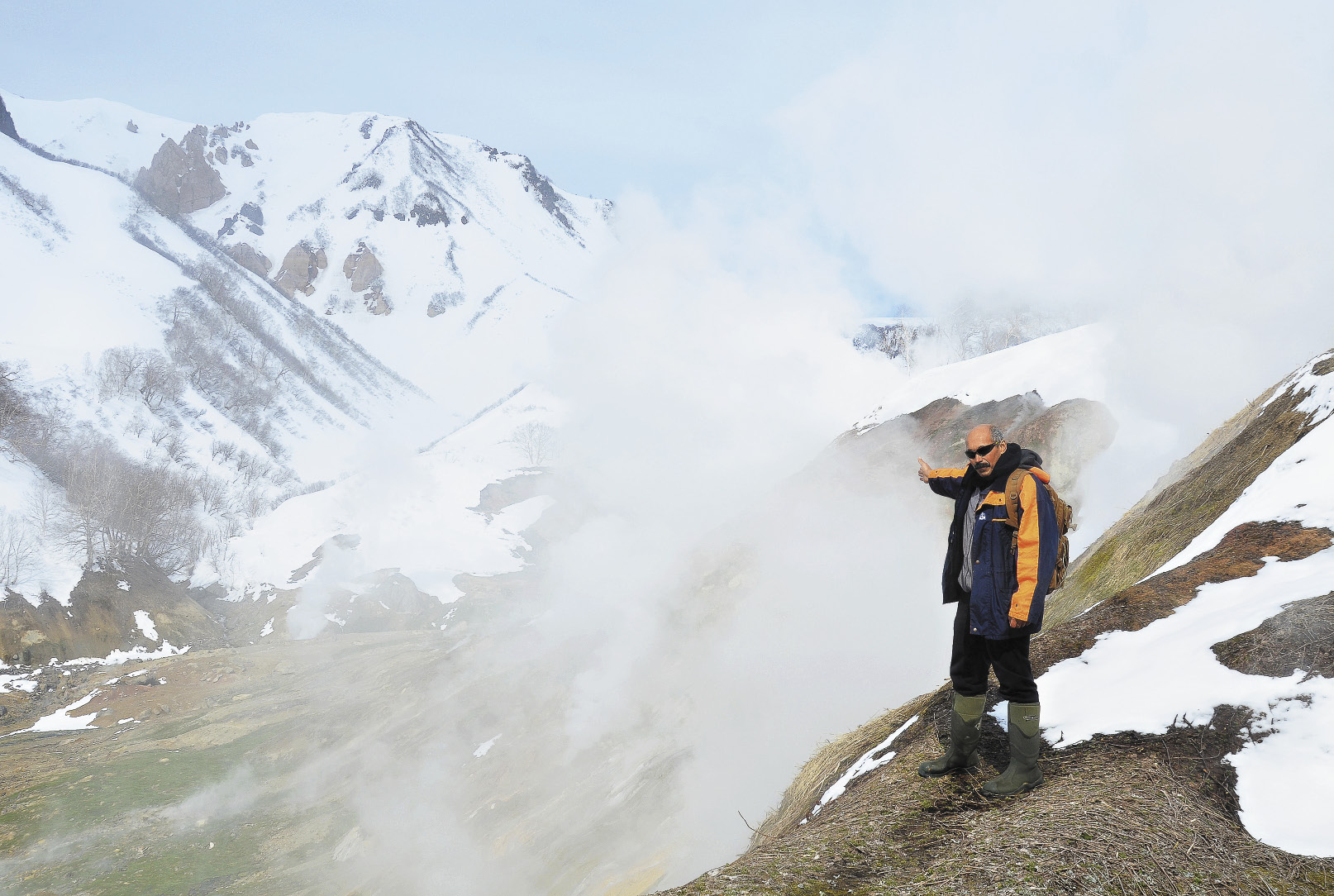 You can find volunteer jobs on the official websites of almost all the nature reserves in Russia. Volunteers are especially in demand during the holiday high seasons, from May to October. But to tell the truth, you won’t earn a lot of money: the salary of a volunteer is very small. In some places, volunteers generally work for free board and lodging, and for the chance to take pictures of the local landscapes and animals. In return you spend time in a real natural paradise.

It turns out that it’s those who are over 18, mainly men, who are admitted to this paradise. This “gender bias” can be explained quite simply: most of all you need strong arms to shovel away snow from the hiking trails, chop firewood, and even build helipads.

Every year more than 100 people, including foreigners, take part in the volunteer programme of the Kronotsky Reserve in Kamchatka. Many people return there from year to year, and some of them become permanent members of the crew. For example, three former volunteers are now working in the reserve guard service.
What is the right way to catch fish?

Pyotr Nikitin has lived and worked on the Kurile Lake, in the South Kamchatka Wildlife Refuge, which is part of the Kronotsky Reserve, and also in the Valley of Geysers. Now he is in the reserve at “Volcanoes of Kamchatka”.

Pyotr Nikitin took his unique photos in the Kronotsky Reserve, where he still works as a volunteer. 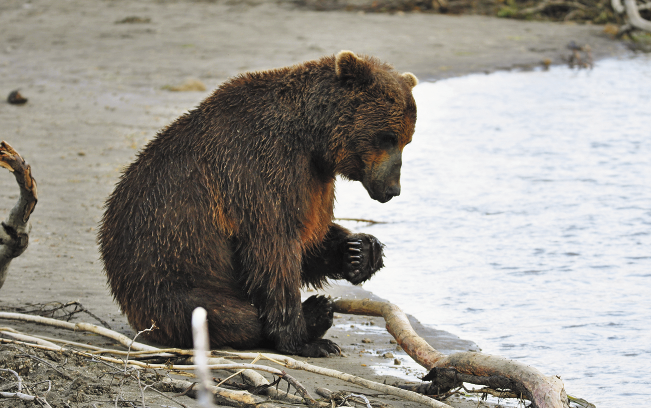 After a hearty lunch, the bears fall into contemplation, even philosophical thoughts. 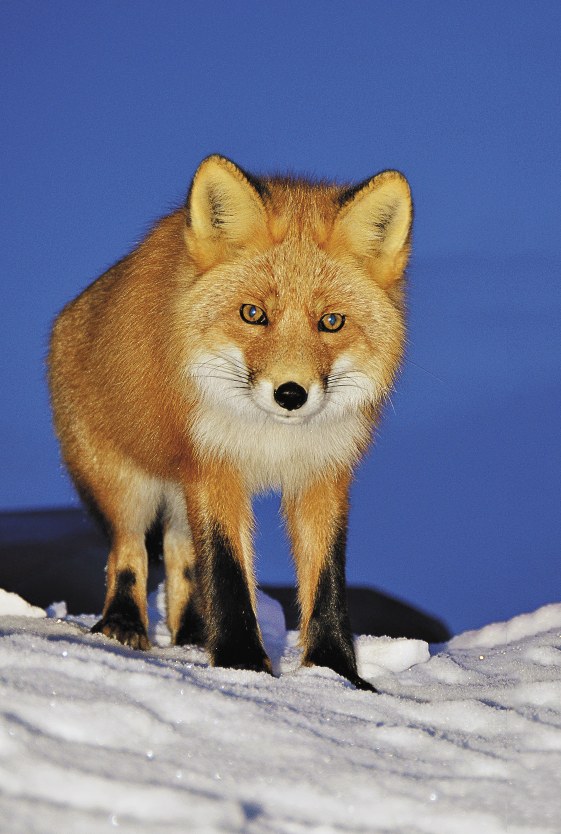 This fox made friends with Pyotr, and came to have lunch with him every day. 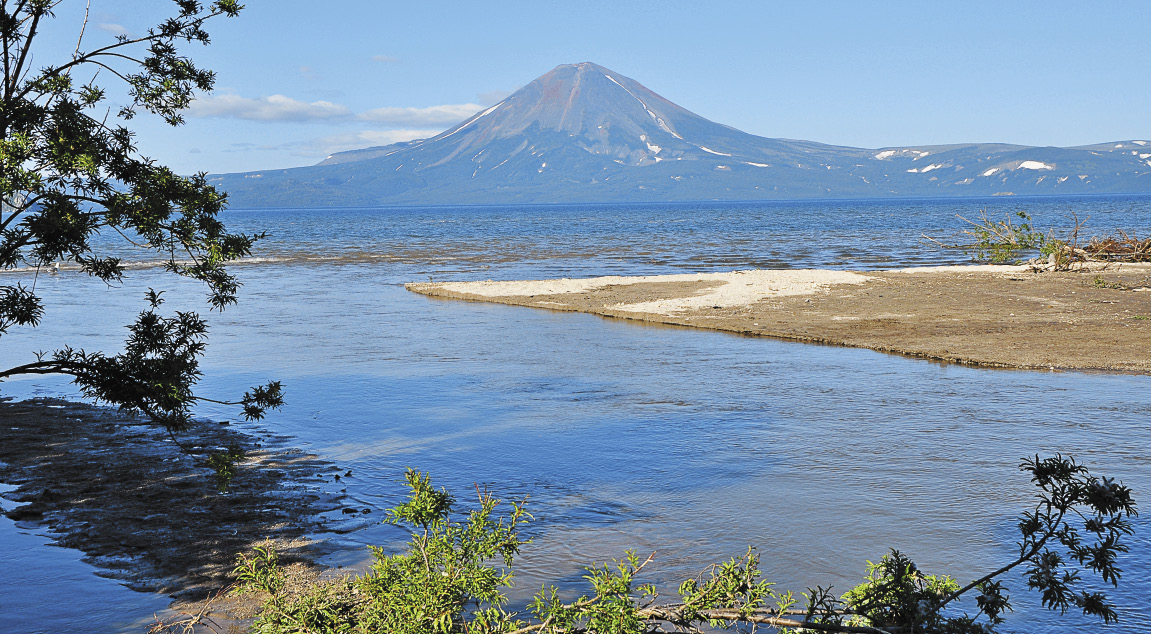 Bears feel at ease in the protected area of volcanoes.

“We flew to the Valley of Geysers by helicopter on April 1, it was still winter, snow lay everywhere,” Pyotr says. “So, at first the main job was to clear the snow from everywhere and prepare the ground trails for the arrival of tourists. In addition, we had some home tasks to do: we stoked the stove, carried firewood, and brought water from the stream. Tourists begin to arrive in May. We unload their luggage, pump water for the guest houses, and fill the kerosene tank for heating. Simply put, nothing heroic.”

Most of all, Nikitin fell in love with watching the bears in the nature reserves of Kamchatka. And the curious bears, especially the young, like to watch people. Sometimes they even come to the tourist cottages, climb up onto the porch, look in the windows as if to say: “What are you doing there, then?”

BEARS ARE VERY FOND OF SLIDING OFF THE SNOW SLOPES ON THEIR BACKSIDES. IT LOOKS LIKE PEOPLE LEARNED TO DO THIS FROM THEM.

“Everything bears do is very interesting: the way they sleep, the way they catch fish – they can look out for fish for hours,” Pyotr goes on. “And when they run, they look so funny when they throw up their hind legs. Bears are very beautiful and intelligent animals.”

The bear Masha and her cubs Samson and Sonya were born last year and have become favourites of travellers. The she-bear has a rare colour – she is blond!

Masha has taught the cubs how to fish the proper way.

When they start to fight or steal the fish from one another, the mother gently cuffs them with her paw.

“It’s interesting to watch her giving a fish to her cubs just after she has caught it,” Nikitin recalls. “A bear usually has one or two cubs, or sometimes she has triplets. But last year I saw a bear with four cubs: three of them were following her, the fourth riding on his mother’s back. In the Valley of Geysers it was interesting to watch bears walking on very steep slopes, or making their way easily through the deep snow.

Incidentally, bears are very fond of sliding off the snow slopes on their bushy backsides. It looks like people learned to do this from them.” 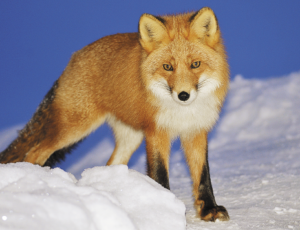 Lunch for the Fox

Bears are not the only animals which roam the reserve. For example, Pyotr made friends with a fox.

“At first we flew to the Uzon cordon, then from there we drove to the Valley of Geysers on a snowmobile,” he recalls. “We lived in Uzon for several days. And every evening one fox came to us, begging for food. This year, a lot of snow had fallen, and it was difficult for her to catch mice from under the snow. That was why we fed her.

The snow melts first in the Valley of Geysers: the heat of the volcanoes warms the earth from within. Straightaway the grass begins to grow in the valley. That is why, when bears wake up after their hibernation, their first meal is grass.

Every one of the volcanoes of Kamchatka is unique, and has its special charm. 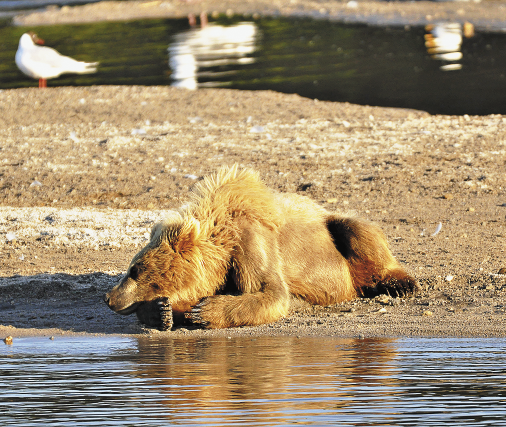 The blond she-bear Masha with her rare “blondish” cubs: Samson and Sonya. 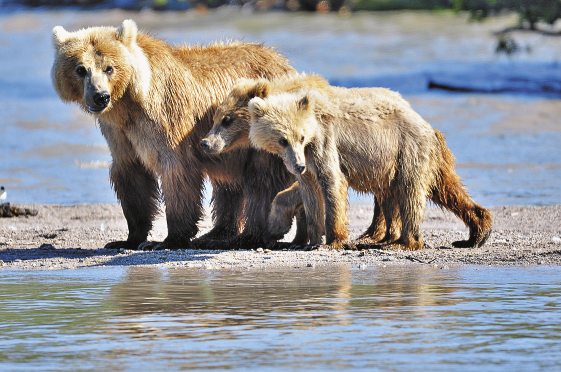 Bears always like to play, especially the young ones. 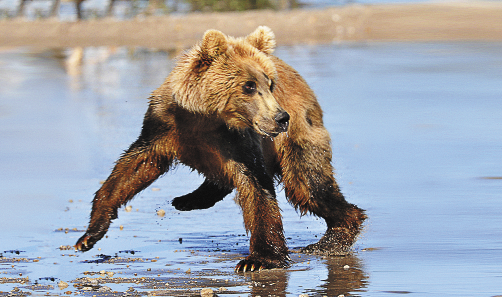 Growing bears may provoke the bear cubs by taking away their fish. But the mother-bear always comes to the rescue of her cub. 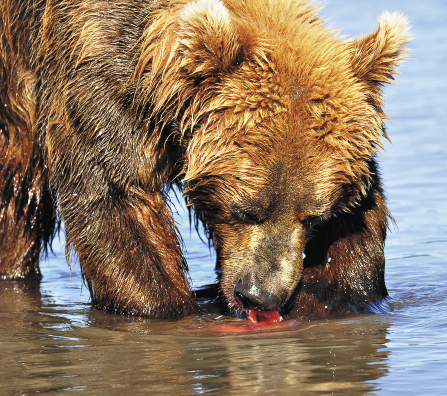 In the famous Valley the geysers are not “turned off” even in the winter. That is why there is always unfrozen water here.

“In spring, until June and July, until the first fish appear, there are lots of bears,” Pyotr says. “You go down to the valley, and bears are grazing there just like ordinary cows in the meadow. But the bears don’t let us come close to them: they are not yet sufficiently stress-resistant after hibernation. Something to remember: if you see that a bear is uneasy, you must slowly move away. Besides, you are only allowed to explore the territory of the reserve in the company of an armed inspector. And we always wear flares there. At sea, they are used for giving distress signals. On land, when it’s triggered, the flare turns into a big fireball, which is enough to repel any danger.

But generally, people are not what bears like to eat! In spring bears need grass: they need to cleanse their intestines after hibernation. Then they go down to the river and put on weight as they eat fish. And by autumn they go after dwarf pines and berries. Cedar cones contain a lot of oil, and thanks to that the bears store fat before hibernation… 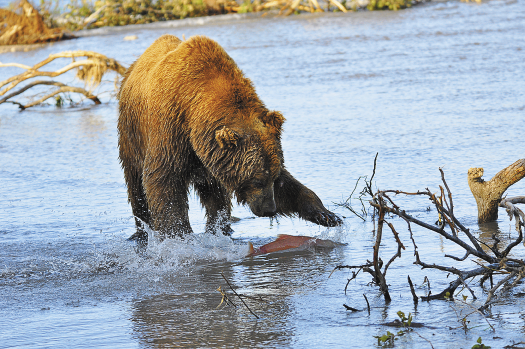 Fishing is bears’ main “job” in the reserves. 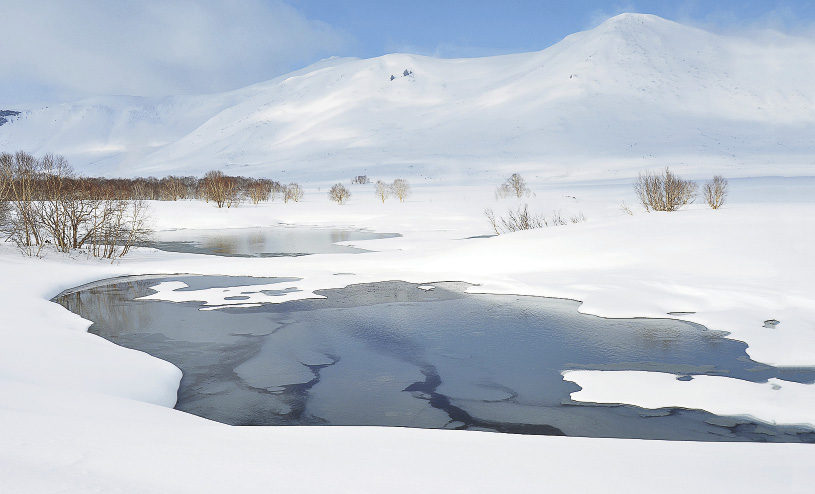 Deep snow prevents the fox from catching mice, so she comes to people for help.

The heat of volcanoes means that the springs in the Valley ofGeysers never freeze over, even in the harshest frosts. 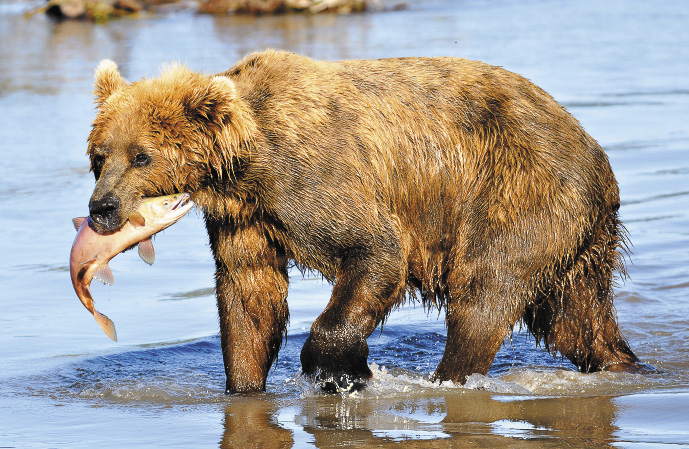 In summer, bears put on weight after they eat fish. And by autumn they go after dwarf pines and berries to store up fat before hibernation.

What we consider a delicacy is an ordinary breakfast for a bear.

On the Kurile Lake, there is a large metal cage from which you can watch them safely.” Once Pyotr was in this cage with some tourists, when one of the biggest bears came up…

“He had caught his fish and eaten them, and now decided to have a sleep, choosing a place just near the gate of our cage,” Pyotr says. “Before going to sleep he dug a hole in the ground, lay down in it and fell asleep. He didn’t just fall asleep, he even started to snore! And you have to remember that bears usually sleep for five or six hours after they have eaten. We needed to get out of the cage, and the bear was just a meter away from us! We did everything: we shouted, whistled, and thundered with the iron door, and even tickled the bear’s heels with a rod! But he couldn’t care less, he didn’t react at all! He was just sleeping and snoring. But only when the second inspector arrived with a gun could we cautiously leave the cage, one by one, under his protection. That snoring bear, tickling his heels certainly cheered us up.”