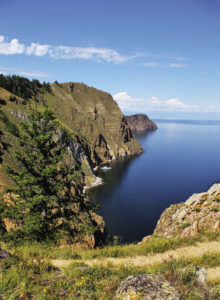 It is, of course, tempting to take a pre-planned route, and exclusive train-hotels, complete with stylish interiors, offer trips for more than two weeks. There are about 90 cities along the route, but only eight stops for tourists: Moscow, Kazan, Yekaterinburg, Novosibirsk, Irkutsk, Ulan-Ude, Ulan Bator and Vladivostok. Passengers cross the Amur River over a bridge that is 2,600 meters long, visit Lake Baikal and ride along the Circum-Baikal Railway. Such trip allow travellers to visit the Urals, Siberia, Buryatia, Mongolia, Transbaikalia and the Far East in one go, to stand on the border of Europe and Asia, to visit the Museum of the Irkutsk Decembrists and the Buddhist monastery of Gandan – the sites and impressions along the way are many and varied.

CEO of Intourist Thomas Cook: At the moment, a large number of regular trains run along the route of the Trans-Siberian Railway, and far fewer VIP-class charter trains. It’s best to plan your trip four-six months in advance. Charter train operators include everything in the programme, from three meals a day to excursions during stops. Such tours are expensive, but high quality is guaranteed throughout the route. For budget travellers we offer regular passenger trains with luxury sleeping car cabins. The savings are noticeable, but the inconvenience is that at almost every important station along the route travellers will have to pack their things and change train: they run to their own schedule and won’t wait for you. But you can visit the main sights at your own pace, spend the night in a hotel (and take a shower). Then the next day, a new train… travelling this way has its own sense of romance.

It’s true that passengers will spend a lot of time in a luxurious but enclosed space – the train does not stop every day, and some regions can be seen only from the windows. There are shorter travel options – through Novosibirsk, Irkutsk, Khabarovsk and Vladivostok. The Moscow-Beijing route is very popular with Chinese tourists, and the journey can begin in either Russia or China.

Experienced travellers recommend organizing your trip on the Trans-Siberian using ordinary trains and stopping overnight in cities along the route – that way, it’s more pleasant and cheaper.

Travel agencies also offer a range of different variants for travelling the Trans-Siberian Railway on regular trains: for 18 days you can ride through Yekaterinburg, Novosibirsk and Krasnoyarsk (visiting the Stolby Nature Park), then move to Irkutsk and spend the day at Lake Baikal, and finally on to Ulan-Ude, Chita , Blagoveshchensk and Vladivostok. It is quite a roundabout route, but you can see more than from an express compartment, and the trip is much cheaper.

Passengers cross the Amur River over a bridge, visit Lake Baikal and ride along the Circum-Baikal Railway.

The price of travel starts from €5,000for two-person accommodation, and rises to €30,000for a luxury compartment.

Which train is best?

The most famous tourist train-hotel on the Trans-Siberian Railway is the “Golden Eagle”, with comfortable two-berth compartments, each with its own bathroom, shower and washbasin. There is a laundry and a hairdresser on the train, and of course a dining-car and bar – excellent for brightening up the days of travel between the far-flung stations of Russia. Although the Trans-Siberian monument is located at the Yaroslavl railway station in Moscow (it is the classic starting point of the Trans-Siberian Railway), the “Golden Eagle” departs from the Kazan station. There is another tourist train, “Imperial Russia”, which also offers passengers separate two-berth compartments with private bathrooms.

The price of travel in these trains starts from €5,000 for two-person accommodation, and rises to €30,000 for a luxury compartment. The classic option of a no-frills trip is the train “Rossiya”, which departs from Yaroslavl station and arrives in Vladivostok 144 hours later. You can choose a shared two- or four-berth compartment, or a space in a six-berth compartment-less wagon (some tourists choose that option specially, for an experience of “exotic Russia”).

Restaurant-cars on trains and station buffets are rarely noted for the variety of their menus, so for more interesting culinary experiences you need to look in the cities along the route. Considering how many regions you will pass through on the way, try Ural pelmeni, Buryat pies with horse meat, and milky Mongolian tea, bacon, and cakes with pine nuts. Traditional railway “fast food” are pies and berries, bought at the stations from local babushkas, although in recent years the authorities have clamped down on this technically illegal form of trading.

You can find all sorts of souvenirs on the trip and, unlike the pies, they can be bought safely at train stations. But a trip on the Trans-Siberian Railway is a case where it is worth buying something on the train itself: flash drives in the form of locomotives, coasters, notebooks and other souvenir products offered to the passengers by the train attendants will be a good reminder of the long railway journey.