Karelia is the land of lakes and forests. The Karelian and Finnish epic, Kalevala, features witches and sorcerers. 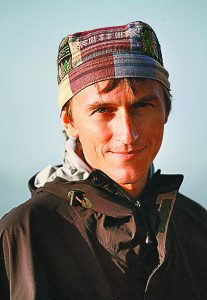 Grigory Kubatyan, a well-known traveler and photojournalist from St. Petersburg, is the author of the books Life on the Road and To India by Bike. In this “Routes” column, he talks about the amazing Karelia.

The Republic of Karelia is Russian Finland, the land of the lakes — the large navigable ones, such as Ladoga and Onega, and hundreds of small ones, where pike, zander and burbot are hiding. The local lakes are named in the Karelian manner: Vygozero, Munozero, Segozero, Pertozero, etc. There is even a Kosmozero. In the north, Karelia backs up to the White Sea, an austere wonder of nature.

There is a Karelian saying: “The Karelian didn’t burn in the fire, but the Russian got lost in the smoke.” It’s a debatable point, but it’s also just a joke. A dark and mystical kind of humor. One thing is clear from the saying: there is no greater misfortune in Karelia than fire, because this is the land of forests and forest dwellers. And thus it is also a land of pagan legends and myths. Folk stories are still alive today that tell of sinister noiade wizards; wandering lights; leshy — forest spirits — capable of leading travelers astray and making them go around in circles in the thick woods; and mysterious labyrinths and gigantic rocks, or seitas, near which spirits dwell. There are also many monasteries, churches and hermitages here. Holy relics and devilry, piety and atheism — everything exists side by side.

Which route to take in Karelia depends on how you are getting there. This time, I set off to drive from St. Petersburg, recording distances between the towns and villages of the Leningrad Region and Karelia with must-see places for tourists.

Staraya Ladoga — this town was dubbed “the capital of Northern Rus” during a high-profile media campaign in 2003. St. Petersburg was at the time celebrating its 300th anniversary, while Staraya Ladoga turned 1,250 years old. The president came here twice, and the city might have expected a big future in tourism and the status of the new “mother of Russian cities”. But that didn’t happen. Nevertheless, it is worth stopping here. Once upon a time, the Varangians lived here, or maybe ancient Germanic people, and even neolithic people, for that matter. Historians study their sites and burial mounds with unfailing interest. I would recommend seeing Staroladozhskaya Fortress, going inside Nikolsky Monastery and climbing up Malyshev Hill to admire the wonderful view of the fortress and the Volkhov River.

There is no greater misfortune in Karelia than fire, because this is the land of forests and forest dwellers. And thus, it is the land of pagan legends and myths.

Tikhvin — site of the Holy Dormition Convent, which is home to the Icon of Our Lady of Tikhvin, believed to work miracles. During World War II, the Germans removed the icon from the country, and it later turned up in Chicago. The icon was returned to Russia in 2004 with great fanfare and a government escort. The monastery has a remarkable bell tower. If you walk around the back of the Assumption Cathedral, you can see inscribed pagan stones built into the foundation of the building. It appears that they were objects of reverence in the distant past. Next to one of the stones, an awning was built and the icon was mounted there next to a collection box for donations. Even today, worshippers come to the miraculous icon and to the stones with their worries and hopes. I asked one lady why. “My mother did it when she was in pain and didn’t know any doctors,” she answered. “And now I come here, too.”

Verkhniye Mandrogi — this village on the Svir River is a bit touristy. Here cruise ships make a stop on their way from Ladoga to Onega. To amuse the travelers, eight log cabins were transported here from the Vologda Region. You can relax in the village, go horseback riding, do pottery, hammer a horseshoe, or visit the museum of vodka and a Russian sauna.

Scheleykiis a small village on the western shore of Lake Onega. Here stands the wooden five-domed church of Dmitry Solunsky the Myrrh-Gusher (St. Demetrios of Thessaloniki), built in 1783. To the north of the village is a gabbro-diabase quarry. This solid volcanic rock resembles basalt and is used for facing the surfaces of metro stations and for the manufacture of tomb stones. The imposing gabbro-diabase cliff is several kilometers long.

In Ruskeala you can bathe in an icy lake, hike on one of the eco trails, or visit the rope-course park with a rope swing. An underground route was recently opened.

Gimoretsky Pogost is the cemetery of the Gimreka village (“gim” means river), with the unique tent-roof church of the Nativity of the Mother of God built in 1659. Miraculously, the wooden church has survived since the times of Tsar Aleksey Mikhaylovich the Silent, the father of Peter the Great. The church is in a state of some neglect, but still looks striking.

Sheltozero is the capital of what is known as the Veps volost (province). The province became autonomous in the 1990s and acquired its own flag, which resembles Scandinavian flags. However, since 2004, the province has officially ceased to exist. The regional ethnographic museum still exists, however, and there are several architectural artifacts. On the way from Gimreka to Sheltozero you can look for “holy Veps groves”. Or, if you are lucky, someone will show them to you.

Petrozavodsk — the capital of the Republic of Karelia. The city has a population of 270,000. There is an attractive city park overlooking Lake Onega, several museums, a philharmonic hall and a botanical garden. In the National Theater (better known as the Finnish theater), you can see the Kalevala epic performed. Near the city is a sled-dog and reindeer farm.

Among popular restaurants, I would recommend a fish restaurant, Fregat (the fish is brought from the Barents Sea), a hipster cafe, Kukhnya, and a log-cabin restaurant, Karelian Gornitsa which serves potato shanga, whitefish and roasted bear meat. You can have a good inexpensive meal in the Testo cafe (chebureki and vareniki), or in the Hermes cafeteria (salads, meatballs, borscht.)

Kizhi is also a pogost, a former cemetery on an island. Nowadays it is a major tourist destination and a UNESCO world heritage center. It’s the biggest collection in the Russian North of wooden houses, chapels, mills and other wonders built with just an axe and no nails. The most amazing thing here is the Church of the Transfiguration, built in 1714 and topped with 22 cupolas. It is currently being restored. Last summer, this extraordinary church stood without cupolas, but the work is supposed to be completed by the end of 2019.

You can get to Kizhi from Petrozavodsk by fast “Comet” or “Meteor” hydrofoil ferries for about $24 one-way. If time permits and you have a car, try the route Medvezhyegorsk — Velikaya Guba — Oyatevschina, and from there it is less than $5 by a motor boat. In winter, you can get here across the ice of Lake Onega on a snowmobile or on skis.

The ticket to enter the reserve is about $8 ($9 on weekends.) Some entertaining activities include a ride in a horse-drawn buggy or attending a culinary master-class. It is forbidden to stay overnight on Kizhi. The nearest accommodations are in the village of Yersenevo: take a motor boat to Oyatevschina, then walk half a kilometer, and you can choose between Kizhanin or Kizhskaya Blagodat guest houses.

Ruskealais a photogenic mountain park with a marble quarry. Here marble for the Hermitage, and Kazan and St. Isaac’s Cathedrals was quarried. During the war, the quarry was flooded and abandoned. The film The Dawns are Quiet Here was shot near the Ruskeala waterfalls, at the site of actual battles. In modern times, another movie was filmed here — The Dark World, which received a very low rating, but was about Lapland sorcerers, lake witches, and the legends that Karelia is rich in.

You can bathe in the lake in Ruskeala (it’s cold!), hike on one of the eco trails, and visit the rope-course mountain park with a rope swing and a climbing wall. Two years ago, an underground route was opened that goes along the old shafts and mines.