LISTING ALL OF THE PLANTS IN THE SOCHI ARBORETUM’S COLLECTION IS NO EASY MATTER. THEY ARE AS WONDERFUL AS THE HISTORY OF THE CREATION OF ONE OF THE COUNTRY’S MOST RENOWNED BOTANICAL GARDENS ITSELF.

Hundreds of years ago, this area was a dense forest full of wild animals. The tiny stream flowing through it exuded an eerie stench for miles around that rightfully earned it the name Gnilushka, which literally translates as “rot”. The year of 1889, when the coastal plot of land was purchased by Sergei Nikolaevich Khudekov, marks the naissance of the Sochi arboretum. Assisted by the German gardener Karl Lemgau, the land’s new owner turned the dense forest slopes into a beautiful piece of landscape art.

Sergei Nikolaevich Khudekov was an extraordinary person. Saying that he was a playwright, a ballet historian, the editor and publisher of the “Petersburg Newspaper”, and a horse breeder, would still not make up a complete list of the activities he engaged in.

Born in Moscow in 1837 into a gentry family, he was the fourth of twelve children.

Sergei Nikolaevich became a student of law at the Moscow University, abandoning his studies when the Crimean War broke out to join the military. He retired from the army five years later as a major, and joined literary society in Saint Petersburg. His works, which he signed with his pen-names “the Sting” and “George”, were published in various periodical editions.

Khudekov abducted his cousin, who he was madly in love with, directly from a ball, and married her against her father’s wishes. The young couple didn’t have an easy start to their married life, and they had nothing to live on. Sergei Nikolaevich’s father had long been out of money, having lost everything to his destructive passion of card-playing.

Financial desperation somehow led Sergei Nikolaevich to first rent, and later purchase, the “Petersburg Newspaper.” The story has it that when the publishing house ran out of paper, and lacked the funds to buy any more, his wife pawned… their pillows.

At that point, fate suddenly smiled on Khudekov. He started with four issues a week, gradually bringing his paper to five, and then, six, weekly issues. It was there that the first works of the then unknown writer Anton Chekhov were published.

In his estate in the village of Erlino in the Ryazan region, Khudekov engaged in gardening and breeding livestock, poultry and horses. The area of the estate covered 92 hectares, and a third of its territory was occupied by the park, or, more precisely, the arboretum. Khudekov later modelled his famous Sochi arboretum on the park in Erlino. 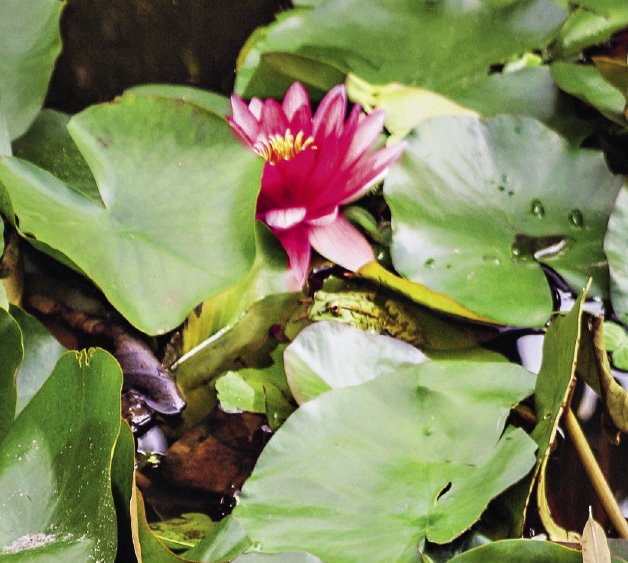 The central alley of the arboretum leads from the entrance to a Moorish gazebo adorned with columns. It was dubbed “Moorish” during the Soviet era. The reason for this is unknown as the gazebo has nothing to do with Mauritania. A sculpture of Aphrodite emerging from the sea foam adorns the gazebo, and is the symbol of the park’s beauty. Her son Eros is sitting on the back of a dolphin just below. The lions symbolise nobility: in Khudekov’s time there was one sleeping lion which symbolised the family’s noble lineage; the second lion was added after the revolution.

Sergei Nikolaevich held soirees with his friends there. They admired the beautiful view of the Oryol (Eagle) pavilion, decorated with two eagles which looked particularly impressive in the rays of the setting sun. At that time, the Oryol pavilion was entwined with climbing roses, and had a small pond nearby. In Soviet times, the eagles, as a symbol of the tsarist empire, were thrown down and smashed to pieces; only the pedestals were left in place.

Now a pueraria — a rather interesting plant — is weaving around the gazebo. It is native to China and Japan, and blooms in July with large and beautiful purple flowers. Within a year, such a vine may grow up to thirty meters in length. Its roots are used for producing starch, the leaves for feeding cattle, and its bark fibres for making thin but durable fabrics.

The green lawn between the Mauritanian and Oryol pavilions served as the shooting location for some of the scenes from the Soviet motion picture “The Adventures of Prince Florizel” with Oleg Dal in the title role. An elegant table and a cage with a parrot in it stood on the lawn in the film.

In Khudekov’s day, every path in the park was covered in a layer of crushed marble. They quickly became overgrown and had to be weeded endlessly, but it was fashionable back then — it was believed that the soil could breathe freely under such a cover.

A snow-white marble staircase led to the master’s mansion. In Soviet times, it was significantly expanded, the marble was removed and basalt slabs were installed instead.

Fountains, sculptures, and vases that adorned the central part of the estate were made in St. Petersburg at the famous iron casting company that belonged to Franz San Galli. The sculptures were transported by steamboat from Kronstadt. Having travelled through the Mediterranean Sea, the Bosphorus and Dardanelles, they arrived at the Novorossiysk port in huge wooden boxes covered with talcum powder, wood shavings, and sawdust. But as a severe storm broke out, the ship could not approach the coast and headed to Sukhum. From there, the statues had to be transported on long araba carts, which extended their journey by four weeks.

Sergei Nikolaevich named the park and the villa “Nadezhda” in honour of his wife, Nadezhda Alekseevna. The ground floor housed a dining parlour — a small room with six windows. The kitchen was located in the house’s wooden annex. As Nadezhda Alekseevna could not stand the smell of cookery, all of the kitchen activities had to be conducted in a separate area, with dishes for the owners of the estate served through a special window.

The Khudekovs often had guests. With the Novorossiysk-Sukhum highway having yet to be built, they had to get there by boat. The used to climb up to the lower part of the park, crossed the “rotten” stream on a wooden bridge and got into the carriages that took them directly to the house: not to the main entrance, however, but to the back door. This was done intentionally: when the guests woke in the morning and went out onto the balcony, the majestic sight of the park and of the sea unfolded before their eyes. Then, the amazed ladies and gentlemen went down the front stairs to the park to admire the extraordinary tropical plants.

The oil lanterns and the ancient cypress growing near the villa are witnesses of those remote times which survive to this day. This giant tree preserved by some lucky chance is one of the world’s oldest remaining cypresses — it is about 140 years old. There are two rare Kashmir cypresses growing in the park as well, the crowns of which have an unusual “weeping” shape. In Northern India, this sacred tree is planted near temples in snowy mountainous areas. Not too many trees can withstand the weight of the snow, but Kashmir cypresses do not have problems in this regard! In fact, the snow doesn’t even have a chance to begin piling on top of the cypresses: it slips and falls down through the cypress’s openwork branches almost instantly.

The “Fairy Tale” FounTain is The only
whiTe sTone casTing in russia. The sculpTor Vladimir BogaTyreV recreaTed
scenes From alexander pushkin’s “The
Tale oF Tsar salTan”. 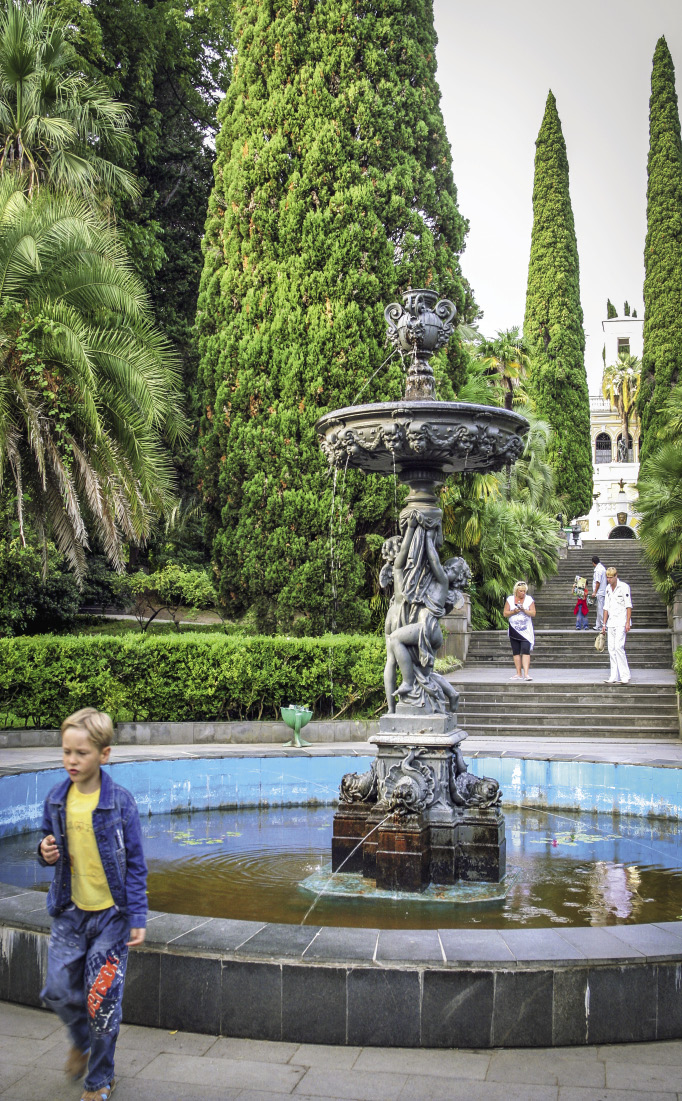 The Road to a Fairy Tale

The upper part of the park features a collection of plants from all over the world. Its arrangement is geographical. If you go to the right, you will find yourself in Italy, with its oaks, palm-trees and cypresses. On the left, you have South-East Asia: China, Taiwan and Japan.

Naturally, there you will see bamboo, ivy, and boxwood. The agave flowerbed is lovely at any time of the year; it is always in bloom. Make sure not to miss the Italian laurel and the North African chamaerops, the lapari date palm, and the cypress from the Island of Cyprus. The Italian laurel arrow-wood has inedible blue fruit, unlike our red arrow-wood with its tasty red fruit. You certainly won’t fail to notice the pitch pine with its 55 cm-long needles. There’s a single cedar of Lebanon growing in the Park. It is still very small but, believe me, it’s so interesting that it’s worth coming to the arboretum just to see it.

The staircase ends at the “Fairy Tale” fountain. It is the only work of white stone casting in all of Russia. The material of the sculptural composition works perfectly for the local climate, unaffected by either heat or moisture. The sculptor Vladimir Bogatyrev recreated scenes from Alexander Pushkin’s “The Tale of Tsar Saltan”. The composition is crowned by a four-meter tall figure of the Swan Princess. The story’s other characters are also represented here – Prince Gvidon, the ship flying across the ocean under full sail, the squirrel gnawing on the golden nuts, and uncle Chernomor with his brave knights, the bogatyrs.

The Civil War caused serious damage to the Park. The White Army chose it for housing their cavalry. Horses grazed on the flowerbeds and ate fresh leaves from the trees while the soldiers chopped down rare trees for firewood. The restoration of the arboretum started in 1924, and it was then also that its collection was replenished with new plants. In 1944, the Sochi Scientific Research Experimental Forest Station was created on the territory on the basis of the Khudekov estate.

Some or other of the plants in the arboretum are in bloom all year round. Even in winter, the air is filled with the scent of the acacia flowers, sweetshrub, and magnolia. The yellow mahonia flowers also come forth, smelling like lily of the valley. Cold and frost may reign elsewhere, but in Sochi the Indian canna blooms. TLR