IN TVER REGION, FOR THE FIRST TIME IN 40 YEARS, A REAL, OLD-FASHIONED STEAM LOCOMOTIVE SET OFF ON A REGULAR ROUTE. IT’S COMPLETELY NATURAL THAT TOURISTS ARE THRILLED TO RIDE IT.

The whistle of a steam engine cuts through the silence at Kuzhenkino station on Saturdays. For a few minutes the sky disappears in puffs of steam, then passengers leaving the two green wagons fill up the wooden platform. The train, which runs from Bologoe to Ostashkov in Tver region, makes a half-hour stop at this station to refill the steam locomotive’s water tanks and to allow passengers to visit the old-fashioned station, now restored and really turned into a kind of museum. Passengers receive a free tour. Tour guides dress in the railway uniform of the 1960s, just like the train conductors. If it wasn’t for the chain supermarket at the station, nothing would impinge on the retro atmosphere that dominates at the station.

Actually, in Russia you can ride on a steam locomotive in other places as well — you don’t have to penetrate deep into the forest wilderness near Lake Seliger to do so. For example, tourist rides on steam locomotives are organized on the picturesque Circum-Baikal Railway around the famous Lake Baikal, departing from Irkutsk. But Bologoe — Ostashkov is the first line since 1976 where steam locomotives are once more used for regular trips — even if only once a week: on the other days of the week a diesel locomotive hauls the train. Tourists ride side-by-side with locals, people visiting their dachas (country homes), and mushroom foragers, while a ride costs the same as a normal suburban fare — only 295 rubles (around $4) for a one-way ticket. 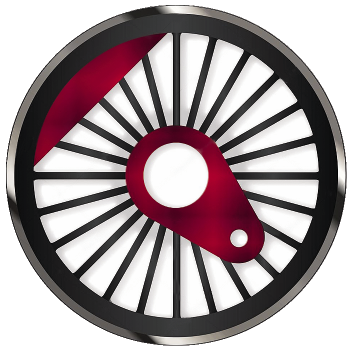 In Bologoe, seeing a steam locomotive doesn’t surprise anyone. The station has two memorial steam locomotives: one greets travellers at the station platform, the other awaits them at the square near the station. But the Seliger retro-train, launched in September 2018, is still a special case. The Bologoe — Polotskaya line on which Seliger runs has long been known to transportation lovers as a true sanctuary of railway history. The line was built in the beginning of the 20th century, primarily for military purposes, and modernization bypassed it altogether — there are still manual switches and cosy wooden stations along the line. Over the last year, a steady stream of tourists has been drawn to this line, also attracted by the local beauty. The majority of the retro-train’s route runs through deep forests with picturesque streams, swamps, and rare trees, and ends
at the banks of Lake Seliger.

Tour guides are dressed in uniforms from the ‘60s, just
like the conductors. But for the chain supermarket at
the station, the retro atmosphere would be complete.

The Seliger steam locomotive experiment was acknowledged to be a success by its railway company. In the summer of 2019, the company launched another retro-train on a regular route —
the Ruskeala Express, delivering passengers from the city of Sortavala to the marble quarries of Ruskeala. This is a daily train (sometimes running twice a day during the summer), and in its first two and a half months of operation it transported twice as many passengers as the Seliger transports in a year.

A different period was chosen for the design of this retro-train: the pre-revolutionary era. Old-fashioned interiors (with the addition of modern sockets with USB connectors) have been recreated in the restaurant car and two compartment cars. The demand for steam locomotive trips in Karelia turned out to be so high that they doubled the number of wagons on the train by the end of the summer.

The price for this ride is somewhat higher than in Tver region — from 455 rubles ($6) for a ticket. The ride lasts for one hour. Before the launch of this train, it was practically impossible to get from Sortavala to Ruskeala by public transportation, and a ride by taxi cost a pretty penny. For the moment, a temporary platform has been erected in Ruskeala, where there are plans to open a marble train station soon. And that’s not the only perspective for the future development of the Ruskeala Express project: there are discussions about the possibility of a steam locomotive ride across the border — to the Finnish city of Joensuu. TLR

Before the retro-train was launched, it was almost impossible to
reach Ruskeala by public transportation. Soon, a marble station
will be opened in Ruskeala, and in the long run, an express
train will run to the Finnish city of Joensuu.

HOW TO GET THERE: ALMOST ALL TRAINS RUNNING BETWEEN MOSCOW AND
ST. PETERSBURG STOP IN BOLOGOE. 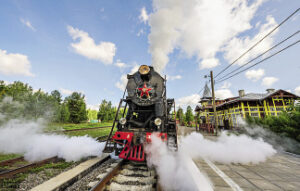 HOW TO GET THERE: THE DEPARTURE TIME OF THE RUSKEALA EXPRESS IS COORDINATED WITH THE SCHEDULE OF THE
ST. PETERSBURG — SORTAVALA LASTOCHKA TRAINS.