KALININGRAD (FORMERLY KONIGSBERG) WAS THE BIRTHPLACE OF THE GREAT PHILOSOPHER IMMANUEL KANT, THE PRUSSIAN ROMANTIC AUTHOR OF FANTASY E.T.A. HOFFMANN AND OTHER HISTORICAL FIGURES.

This western enclave of Russia, which until 1945 belonged to Germany, is often called the “Amber Region” or the “Pearl of the Baltic”. Kaliningrad (formerly Konigsberg) was the birthplace of the great philosopher Immanuel Kant, the Prussian romantic author of fantasy Ernst Theodor Amadeus Hoffmann and other historical figures. Today, the city’s population is almost 500,000, while about a million people live in the Kaliningrad Region itself. The journey from Moscow to Kaliningrad by road is 1,281 km, passing through Belarus and Lithuania. Therefore, some fans may need a Schengen or Belarus visa to travel by that land route.

Kaliningrad will host four world championship matches: four group games – with the participation of teams from groups C, D, F and H. They will be held on June 16, 22, 25 and 28 at the new “Kaliningrad Arena” stadium, which has been specially built for the World Cup.

The “Kaliningrad Arena” football stadium (also called “Arena Baltika”) is being built on the October Island near the city centre. Its stands will be able to accommodate 35,000 spectators.

While the exact routes for approaching the stadium have not been finalized, it has been announced that near the arena there will be two parking lots, capable of accommodating 7,200 cars. Buses number 40, 46 and 47 travel to the stop “Veterans’ Quay”. In addition free shuttles will be organized for fans with tickets.

The fan zone will be located at the House of the Soviets, on the site of the former Old Tower complex, and also partly on the territory of the Historical and Art Museum. The fan zone will be able to accommodate 35,000 visitors, with concert stages and playgrounds, a food court, sponsorship pavilions, local artisans’ shops, and an official FIFA shop.

Kaliningrad and its suburbs has many establishments offering Russian, German, Eastern European, Mediterranean and Japanese food. The Top 10, in the opinion of locals, are the cafes and restaurants “Britannica”, “Borsch and Salo”, “Zotler Bier”, “Madame Bushe”, “Hop”, “Parmesan”, “Tabasco”, “Ashman Park”

If you have free time, take a day trip to the resort of Zelenogradsk and the picturesque Curonian Spit.

An observation gazebo on Willgaiten pond, a picturesque and quiet spot 20 km from Kaliningrad. 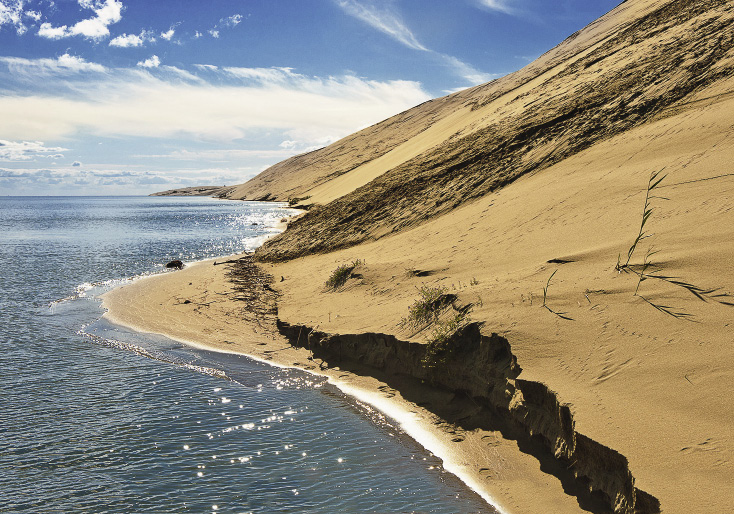 The 98-km-long Curonian Spit is a UNESCO World Heritage Site.