Almost a third of the territory of Adygea is protected as part of UNESCO’s West Caucasus World Natural Heritage Site. The republic’s most striking natural feature is its unusual cave system, which run through the mountains like the holes in Swiss cheese. The pride of Adygea is the Lago-Naki Plateau, remarkable for its limestone karst, comprised of underground streams that have formed interlinked chambers and galleries. If there’s still snow cover when you’re trekking through the mountains in Adygea, heed caution – there could be deep sinkholes underneath the snow!

For travelers on a budget

Andrey Nazarkin, a keen spelunker and cave exploring enthusiast from Volgograd, is not a rich man- nor are his friends. However, with four of them in an SUV loaded to the gills with tents, tinned food, and all sorts of other provisions, their seven-day trip through Adygea cost almost nothing (not counting, of course, the cost of gas and the initial outlay on the trunkful of food). The only expense the travelers incurred in Adygea was the conservation fee for entry into the Caucasus Nature Reserve of around $5 USD per person, per day. It’s also worth noting that there is a fine of around $40 per person for pitching a tent on an unauthorized site.

Moreover, there’s really no need to bring provisions with you to Adygea. On your way to the mountains, you’ll pass through several villages, with stores and small local markets where you can buy fresh Adygei cheese, locally made wine, bread, vegetables, fruits, and meat for grilling.

If you wish to, you can also choose to leave your car parked in the yard of a local’s house (there are residents who offer this service for a reasonable daily rate), and then take a taxi to the entrance of the Lago-Naki Plateau. The staff of the Emergency Situations Ministry on duty there will always ask where you’re headed. This is because if worst comes to worst, they’ll be the ones to come looking for you either in helicopters or on foot with dogs!

“We’ve visited Adygea twice, once to the Lago-Naki Plateau at the end of May, and then in autumn, when the first snow had already fallen, to the Bolshoy Tkhach nature reserve,” Andrey tells me. “What we were really interested in were the caves. For example, the Great Bird cave on Lago-Naki Plateau is so high up that to start with, we had to climb a glacier and get all our ropes and other kit up there before going inside. But the Lago-Naki Plateau itself is stunningly beautiful. It’s a real lost world. Th ere’s one ravine there where I took most of my photos for the trip. Once upon a time during an earthquake, huge stones rained down into the ravine, creating an extraordinary labyrinth. And in the middle of this stone labyrinth mountain flowers bloom luxuriantly. Right on the bare cliff face, there are gorgeous rhododendrons with big white flowers.

On one day of our week-long visit to the plateau, my friends went to investigate the Absolyutnaya shaft , but they quickly realized that they’d be risking life and limb going into that cave, and decided not to bother. Even in summer, that particular hole in the cliff s is full of ice and snow. On the other hand, our trek to Psenodakh Lake gave us some wonderful views. There’s a straight path to Psenodakh Lake along the foot of Mount Oshten, so it’s hard to get lost. Th ere are no great changes in gradient, so it’s almost completely safe if you don’t count the risk of slippery patches of snow. The path is about 9km in each direction, and if you want to see the landscape at its best, try to get an early start – there’s not much sun there aft er 1pm. There are marks on the stones showing the path to the lake.” Psenodakh in the Adyghe language means “beautiful well”. Th e lake is about 1938m above sea level and is crescent-shaped. Th ey say it’s a site of mystic energy, so it’s a popular destination with lovers of esoterica.

“The Bolshoy Tkhach nature park has very beautiful forest, where we saw bear prints,” continues Andrey. “Th en we bumped into some hunters who asked if we’d seen any actual bears and warned us to hide all our food at night if we didn’t want bears coming to tear up our tents.”

Mountainous Adygea also boasts the world’s most unusual sea – the “Sea of Stones”, which resembles a 100m stone collar that grips the Lago-Naki Plateau at its eastern end. Th e Sea of Stones is a natural object protected by UNESCO. In reality, it’s the product of frozen lava, which erupted from a volcano at the bottom of the ancient ocean of Tethys. Between the ridges of Oshten and the Sea of Stones, there’s a cliff called the Hedgehog, and nearby on the way to the Guzeriplskiy Pass is a viewing platform off ering spectacular views with the wonderful name “The Hedgehog’s Navel”.

The Lago-Naki Plateau itself is stunningly beautiful. It’s a real lost world. Right on the bare cliff face, there are gorgeous rhododendrons with big white flowers. 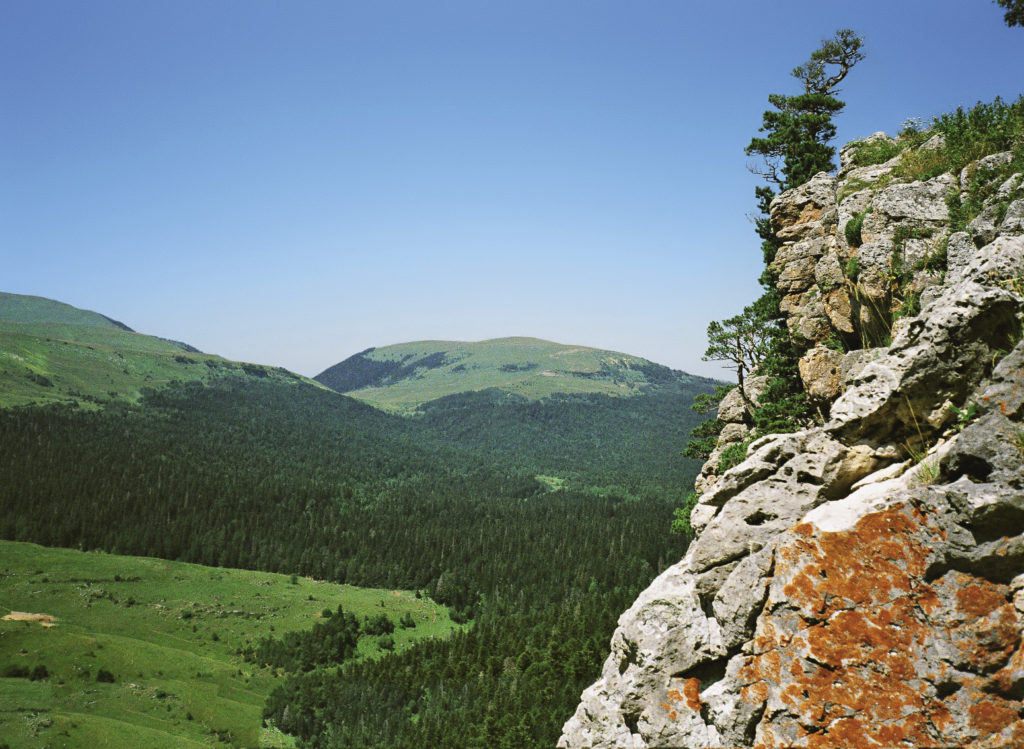 For lovers of comfort
Svetlana Djigaros and her daughter Diana traveled to Adygea’s tourist capital, the village of Kamennomostskiy, located only 40 minutes by taxi or scheduled bus from Maykop. Th e village off ers a number of hotels, with room rates starting at around $10 a night per person.

Kamennomostskiy (“Stone Bridge”) got its name from the bridge crossing the Belaya River that leads to the area’s main visitor attraction, the Khadzhokhskaya Gorge. Th ere’s a toll of $5 to cross the bridge, but some locals recommended a way to reach the gorge without using it. Th e Khadzhokhskaya Gorge is a remarkable place. Th e river roared its way through the mountains here, creating a bubbling brook between majestic cliffs.

An hour-and-a-half walk from the gorge is the Rufabgo Waterfall. It’s not an easy destination to reach, and requires travelling through forest and canyons with steep ascents and descents. It’s a beautiful place, but the beauty alone was not enough for the Djigorases – mother and daughter booked a canyoning trip through the waterfall. Th is activity costs $32 per person, and children as young as 10 can have a go. “We wanted something extreme,” recounts Svetlana.

“Canyoning seemed a really interesting idea. We were provided with the necessary climbing equipment and a training session. Th en the instructors led us down on ropes straight through the waterfall, down the cliff s, and along the riverbed. It was so exciting that the following day we decided to go raft ing along one of the most dangerous rivers in the country – the Belaya River. Th e raft ing course travelled not along the standard route, but along a special extended route recommended for athletes (Diana is a well-known judo practitioner). It cost $80 for the two of us and was worth every cent. I’m still over the moon about our holiday to Adygea. They can say what they like about the lack of service, but the attraction of Adygea is its wild beauty, its pristine nature, and of course the adrenalin rush of the activities.”

The next day, Svetlana and Diana visited the dolmens around Kamennomostskiy. Close to the village there’s a concentration of 14 dolmens. The most magnifi cent of these is Chygyudzh, which has survived completely intact to this day. Th e next morning, mother and daughter headed for Azishskaya Cave. This is the largest cave equipped for visitors on the Lago-Naki Plateau, with a wealth of stalactites and stalagmites. Inside the caves, the temperature is a constant 4ºC year-round, and there are coats available for hire at the entrance. Group and individual guided tours are off ered. Entry prices are as follows: adults $6.50 and children $3 for group tours, adults $8 and children $5 for individual excursions.

“On day five, we went to the Mishoko Ravine. It’s a diffi cult two-hour trek through some picturesque scenery and a prehistoric cave, so we were very appreciative of the hot lunch that was provided to us upon arrival at our destination. Inside the ravine it’s unbelievably beautiful, with a great feeling of space and a light breeze carrying the scent of meadow flowers, the chatter of birds, and the buzzing of bees. Thrill-seekers can fl y over Mishoko Ravine on a zip line, the cost of which is $25. You sweep over the abyss from one cliff to another, and it’s not for the faint-hearted.”

On their sixth day, Svetlana and Diana visited some thermal springs, of which there are many in Adygea. You can reach them easily enough by taxi, and the entry fees start at $4.00, depending on the spring you choose to visit. On their seventh day, Svetlana and Diana Djigaros simply went strolling around the area, dressing up in traditional local costumes for photographs, just breathing in the mountain air. If they had wanted to, however, they could have found more to do. For example, taking a ride on the cable car to the Devil’s Finger cliff on Una-Koz Ridge, which costs $10 per person.

If you’re planning to eat out all the time, bear in mind that the local cafés are oriented to tourists, with prices to match – a single cheburek meat pie can cost $1.30. Svetlana Djigaros calculated that the entire cost of the week-long trip for her and her daughter in Adygea was a little over $650.

How to get there
There is no airport in Maykop. Visitors usually take the train to Krasnodar or Armavir, and a bus from the bus stations in either city to Maykop. From the capital of Adygea, you can reach Kamennomostskiy or
the other tourist centers and leisure camps of the republic by taxi or minibus.

What to see
One has to travel by car to reach the Lago-Naki Plateau by taking the Maykop-Kamennomostskiy (also called Khadzhokh) road and turning right shortly before reaching the settlement of Dakhovskaya. The route is well signposted. There are no scheduled buses, so the only alternative is to hire a taxi.

What to wear
The weather in Adygea can abruptly change in a single day, and there are also several climatic zones in the mountains. It’s worth bearing this in mind and packing your rucksack with several layers that you can quickly put on or take off. It’s also a good idea to take something waterproof with you.